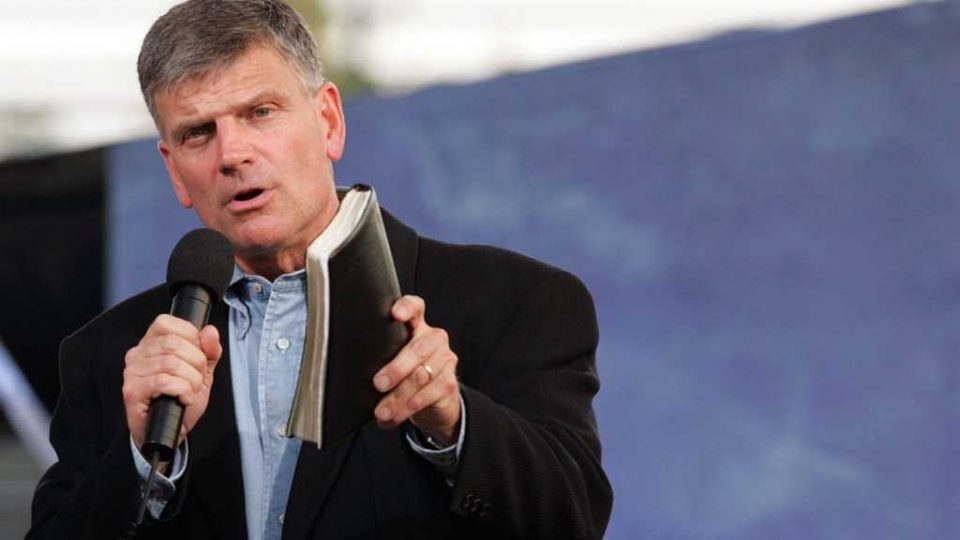 Franklin Graham is one of the most prominent pastors and Trump supporters in America.

Graham speaks to millions of Christians who live their faith every day of their lives.

But his life was turned upside down by one horrible mistake.

Tech companies colluding with the Democrat Party to censor conservatives, Christians and Trump supporters became one of the dominant themes of the latter half of 2018.

The lords of Silicon Valley – that control social media companies – are all anti-Christian, anti-Trump leftists.

A handful of barrens living in the liberal enclave of San Francisco have unlimited power to turn off your ability communicate with the outside world.

And Franklin Graham was the latest victim.

Springsteen – as well as every other Hollywood leftist – boycotted the state over a law that banned grown men from creeping around women’s bathrooms.

“Bruce Springsteen, a long-time gay rights activist, has cancelled his North Carolina concert. He says the NC law #HB2 to prevent men from being able to use women’s restrooms and locker rooms is going ‘backwards instead of forwards.’ Well, to be honest, we need to go back! Back to God. Back to respecting and honoring His commands. Back to common sense. Mr. Springsteen, a nation embracing sin and bowing at the feet of godless secularism and political correctness is not progress. I’m thankful North Carolina has a governor, Pat McCrory, and a lieutenant governor, Dan Forest, and legislators who put the safety of our women and children first! HB2 protects the safety and privacy of women and children and preserves the human rights of millions of faith-based citizens of this state.”

Facebook – as well as other social media companies – routinely engage in corporate censorship on behalf of the Democrat Party.

Liberals know the First Amendment prevents the government from ever passing laws regulating speech on social media so instead they turn to their corporate overlord allies to snuff out any pro-Trump, pro-Biblical values, and pro-family speech.

They picked on someone with millions of followers.

Graham alerted his followers to the fact that he was suspended for 24 hours because of the post.

“Well, now we know. Facebook has a secret rulebook for policing speech. I was banned from posting on Facebook last week for 24 hours. Why? Because of a post from back in 2016 about North Carolina’s House Bill 2 (the bathroom bill),” Graham wrote on his Facebook page.

Many Americans believe social media companies are out to get them.

No one ever reads stories about liberals being banned from social media.

There are no consequences for liberal social media bullying or bigotry.

But if a Christian or a Trump supporter steps one inch outside the bounds of what the far-left considers mainstream political thought they are “unpersoned” on social media.

Many Americans consider social media censorship to be the defining issue of 21st century America.

In previous eras, it was not like the phone company could take away your telephone if they disapproved of your political views.

But in today’s society, a handful of liberal billionaires have complete and total power to decide who is allowed to speak politically.