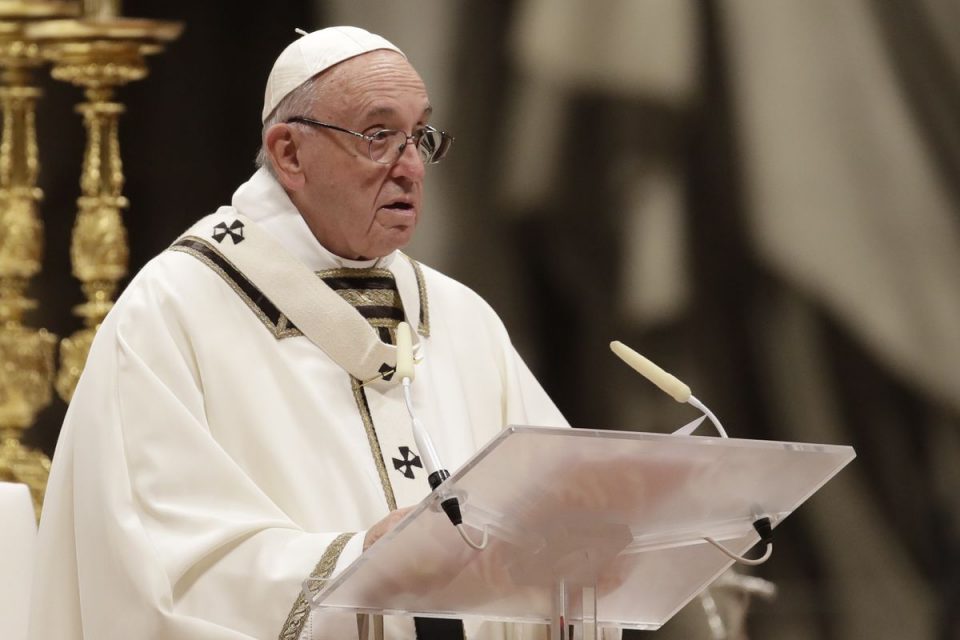 The head of the Catholic Church stood up and delivered a speech that shocked the conscience of millions of people across the world.

Pope Francis spent the last three years acting as the chief critic of the conservative and populist movements rising up around the globe.

Citizens in America and across Europe rose up in anger at the globalist agenda promoted by Barack Obama and the European elites.

And Obama and his criminal conspirators fought to dissolve borders and the concept of nation-states through mass migration.

Rather than stand with the struggling middle class, Francis sided with the wealthy elite who use globalist institutions to oppress their native populations.

Pope Francis stood before a group of diplomats at the Holy See and compared Donald Trump and the rise of populist opposition to the new world order to Adolf Hitler and the Nazis.

This was a stunning turn of events.

Francis began his remarks by warning that international institutions were ‘under attack’.

“Where even one of these elements fails, the search for unilateral solutions prevails and, ultimately, the overwhelming of the weaker by the stronger,” Francis continued by pointing that “we note that the same attitudes are still undermining the stability of the main international organizations.”

Francis lamented the fact that the Nazis rose to power after President Woodrow Wilson put together the League of Nations after World War 1 to put a stop to global conflict.

“…populist and nationalistic propensities prevailed over the action of the League of Nations. The reappearance of such impulses today is progressively weakening the multilateral system, with the result of a general lack of confidence, a crisis of credibility of international politics and a progressive marginalization of the most vulnerable members of the family of nations,” Francis concluded.

Pope Francis is clearly in need of a history lesson.

The League of Nations failed because countries rejected the organization global mandates to take up arms against countries member states deemed “friendly” should they engage in a conflict with another League participant.

The collective security demand was one big reason the United States Congress rejected President Wilson’s push to have America join as a charter member.

Senators and Congressmen saw that the League stole the Congresses constitutional power to declare war or enact sanctions and instead place that awesome ability in the hand of a global body that was not loyal to any one people or set of borders.

There is an old saying that whoever brings up Hitler first in an argument loses.

Francis betrayed the desperation of the liberal world order that Donald Trump and conservative movements across the globe are challenging.

When Barack Obama left office, he figured the global institutions he nurtured for eight years were invincible.

But the truth of the matter is Obama’s liberal world order rests on feet made of clay.

Pope Francis hysterically comparing Trump and the rise of conservative movements across Europe to Hitler exposed just how close the global elites believe they are to losing power.