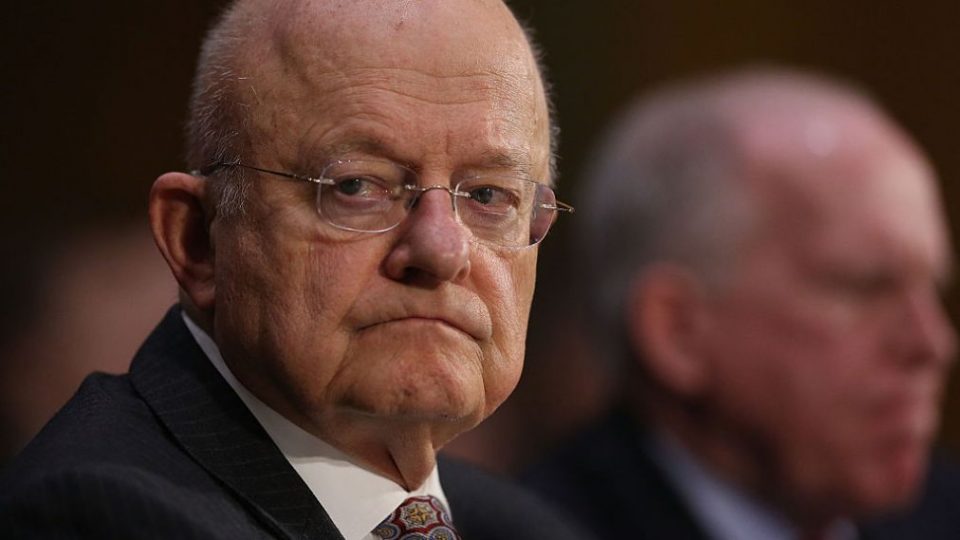 Clapper should be jailed for committing perjury but like Hillary Clinton, Clapper is an entrenched D.C. Swamp creature, so nothing happened.

But his recent statement on CNN about lying to Congress should have Clapper in handcuffs.

Clapper was asked a straightforward question by Sen. Wyden: “Does the NSA collect any type of data at all on millions or hundreds of millions of Americans?”

“No, sir. . .not wittingly,” Clapper responded.

There was zero doubt or confusion in Clapper’s response, and it garnered no immediate concern.

But then, just a few short months later, the now infamous NSA whistleblower Edward Snowden, with the help of journalist Glenn Greenwald, revealed that Clapper had flat out lied to Senator Wyden and the American people.

The American government was in fact not only collecting and storing bulk data on law-abiding Americans’ phone records — it was also employing methods to capture vast amounts of email and internet data as well.

What James Clapper told a sitting U.S. Senator in a rare open session about America’s security apparatus was nothing short of perjury.

Clapper lied and he knew it. He just didn’t care.

After the Snowden revelations, the Obama Administration was characterized as Big Brother but Obama and his minions claimed the vast collection of Americans’ internet activity was “vital to national security.”

Clapper and his staff refused to clear the record, refusing to comment publicly because of the Snowden leaks.

Eventually, Clapper stood by his comments, saying “What I said was, the NSA does not voyeuristically pore through U.S. citizens’ emails. I stand by that.”

But as the actual exchange shows, Clapper never mentioned email in his response to Sen. Wyden.

After the Snowden leaks, Clapper and the Obama administration realized they were in hot water from Clapper lying and continued to try and extinguish the fire that had been set.

Clapper eventually admitted he made a mistake hoping to ease tensions. And it worked.

Clapper never received jail time or a fine or any penalty. In fact, he continued to serve as National Intelligence Director.

Fast forward to today and we’re forced to watch Clapper continue his lie in a recent interview on CNN.

Like a typical swamp creature, Clapper doubled down explaining he didn’t lie, he “simply just didn’t understand the question.”

Clapper continued to say the point of the NSA spying network “was to be able to track quickly a foreign communicant talking to somebody in this country who may have been plotting a terrorist plot.”

“As far as the comment, the allegation about my lying: I didn’t lie, I made a big mistake and I just simply didn’t understand what I was being asked about,” he added. “I thought of another surveillance program, Section 702 of the Foreign Intelligence Surveillance Act when I was being asked about Section 215 of the Patriot Act at the time. I just didn’t understand that.”

But the Trump administration apparently believes the program doesn’t work and hasn’t used the ability to spy on Americans authorized in the 2015 “Freedom Act,” for months.

And according to the New York Times  “The National Security Agency has quietly shut down a system that analyzes logs of Americans’ domestic calls and texts, according to a senior Republican congressional aide, halting a program that has touched off disputes about privacy and the rule of law since the Sept. 11 attacks.

The agency has not used the system in months, and the Trump administration might not ask Congress to renew its legal authority, which is set to expire at the end of the year, according to the aide, Luke Murry, the House minority leader’s national security adviser.”

If true, this is a huge win for civil liberty activists.

Given all we know, Clapper’s deception and knowingly lying to not only a sitting U.S. Senator but to the American people should land him in jail.

But perjury is not just tolerated in the D.C. Swamp. It’s rewarded. After all, nothing says loyalty like lying to the American people under oath.

The good news is President Trump seems willing to end the unconstitutional spying on American citizens.

We will continue to keep you updated.

Alexandria Ocasio-Cortez Has Become the Poster Child of Socialism