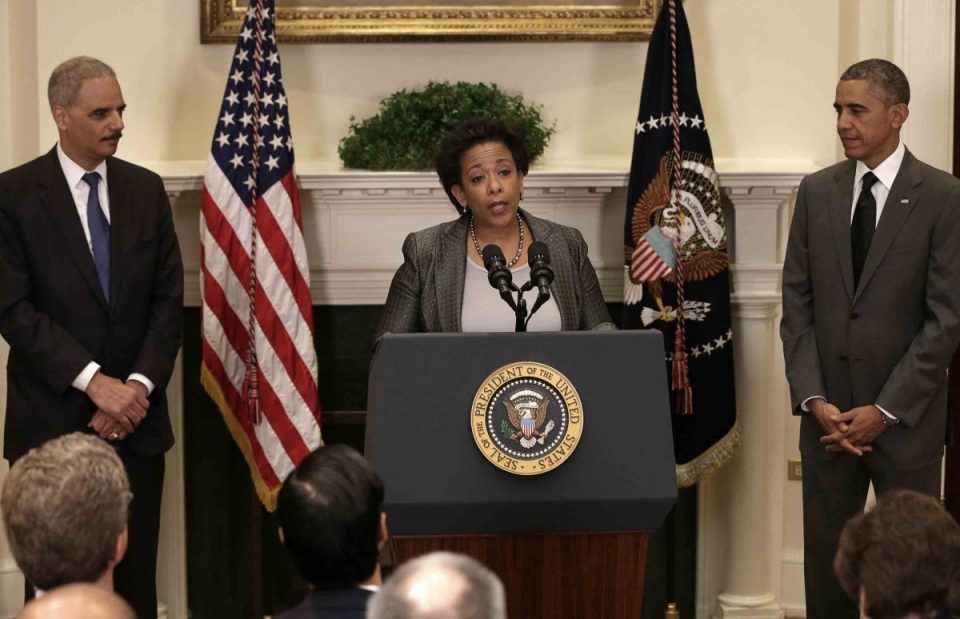 She once worked with rogue prosecutors, the FBI and the IRS to go after conservative groups, candidates and causes.

Because this former Obama Attorney General is putting a real scare into Comey and his cohorts.

Disgraced former FBI Director James Comey has come up with a very implausible justification for opening up the investigation into the Trump 2016 campaign.

He claims a drunken encounter between a low-level campaign aid and an Australian diplomat in 2016 was the genesis of the entire operation.

But, that excuse is falling apart quicker than Comey can come up with the lies to defend it.

Her newly released testimony flat out puts the lie to Comey’s claim that it wasn’t the Steele dossier that started the investigation but rather George Papadopoulos.

According to Comey and his supporters in the media, George Papadopoulos, at the time a young, volunteer foreign policy adviser to the Trump campaign, allegedly told Alexander Downer, an Australian diplomat, in May 2016 at a London bar that the Russians had dirt on Hillary Clinton.

“The . . . revelation that a member of the Trump campaign may have had inside information about it were driving factors that led the F.B.I. to open an investigation in July 2016 into Russia’s attempts to disrupt the election and whether any of President Trump’s associates conspired,” the New York Times reported.

Not coincidentally, this all occurred in the same month the House Ethics Committee cleared Congressman Devin Nunes (R-CA), the then-chairman of the House Intelligence Committee, of a bogus ethics complaint that had sidelined for eight months his work into the now discredited dossier and its connection to top Obama officials.

Just a few months later, Nunes would release his highly disturbing memo, exposing for the first time how the Obama FBI used the Steele dossier as evidence to get a FISA application to wiretap campaign volunteer Carter Page.

In their article attempting to defend Comey, and the rest of the DOJ Deep State operatives, the Times reporters stressed that the political propaganda known as the Steele dossier had nothing to do with the investigation.

As we now know, that was merely the sack of lies being fed to an either unwitting or all too cooperative media by Obama officials and Comey in particular.

The Papadopoulos lie has been told over and over again for 18 months by the media, Democrats, and Never Trumpers to cover for the fact that the opposition research done by Trump’s political enemies was the basis for the Russian election collusion probe.

Even Comey is sticking to that story, despite concrete evidence to the contrary.

“My recollection is the first information we had, certainly the first information that came to my attention that Americans might be working with the Russians as part of their efforts, came at the end of July . . . when we received information from an allied nation about the conversations their ambassador had in England with George Papadopoulos,” Comey told lawmakers in closed-door testimony last December.

“That was the beginning of it, which is the first time we turned to trying to figure out whether any Americans were working with the Russians.”

But none of that is true, according to Lynch, who was Comey’s boss at the time.

According to Lynch, Comey briefed her in “late spring” of 2016 about Carter Page, not George Papadopoulos.

“I recall receiving information about Mr. Page from Director Comey to Deputy Director McCabe in the context of here is some information that we think you should be aware of,” Lynch told a joint session of the House Judiciary and Oversight committees in December.

Under further questioning, Lynch again confirmed the timeline: “As we look at the constellation of things that have come to be known as the Russia investigation, things were brought to my attention in 2016, I believe it was the spring and throughout the summer.”

One of the downfalls of any conspiracy is the inability of its leaders to keep their stories straight, and their inability to keep even the basic facts straight.

Trump Just Gave the One Order the Deep State Feared Most