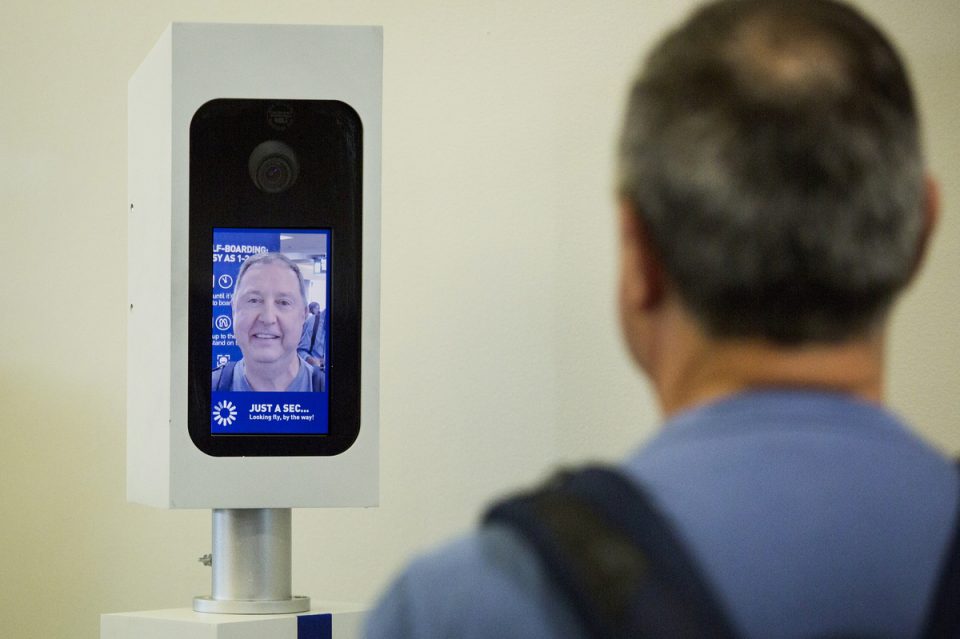 Airlines are working with the federal government to collect your facial characteristics.

They claim it’s all for easier boarding, efficiency, and a “better traveling experience.”

But, your fears are real; the Deep State knows your face.

A few weeks ago we reported on the explosion in facial recognition technology and its use by airlines.

We warned it was a potential invasion of privacy and possibly worse. Of course, the airlines claimed there was nothing nefarious at all about facial recognition.

Now reports are coming out that show we were right all along.

If you travel, whether you like it or not, your face is being scanned, studied and entered into a database.

A database the airlines are only far too eager to share with government agencies and sell to other companies.

Even the liberal Deep State mouthpiece Washington Post came out with an article titled “Don’t smile for surveillance: Why airport face scans are a privacy trap”.

The article, written by technology columnist Geoffrey A. Fowler, gets right to the point:

“You won’t need to pull out your ticket to board the flight to Cancun at JetBlue’s Gate 18 at John F. Kennedy Airport. Put away your passport, too.

All this convenience costs is your face. You get only one of those, so I hope it’s worth it.

Facial-recognition technology is unproven and largely unregulated — yet it is already arriving at airports all over the United States. At JetBlue ‘e-gates’ and earlier prototypes, the airline has scanned 150,000 faces in the past two years to verify international travelers before they board.

In Atlanta, Delta has an entire ‘biometric terminal’ that uses your face at check in, bag drop, security and boarding. It says the scans help board international flights nine minutes faster, saving two seconds per passenger.”

As Fowler points out, this is exactly the kind of “convenience” technology that many Americans accept unknowingly and unwittingly.

It actually has all the makings of the kind of high-tech, futuristic privacy-invading technology we once laughed at in B spy movies.

Or, it’s the stuff of China’s police state, where for “convenience” Chinese citizens end up rounded up, tortured and killed due to such technology.

Now, mostly in the name of efficiency, airlines and the U.S. government are, on a very large scale, scanning the faces of people who aren’t suspected of crimes, aren’t under investigation, have never posed a threat, and have not consented to it.

It’s so far America’s biggest step yet to normalize treating our faces as data that can be stored, tracked and, inevitably, stolen, or used by the government in political witch hunts.

Of course, both the airlines and the federal government claim this is only being done to improve the travel experience and for increased security, they proudly point out that it saves the average passenger a whopping two seconds in the boarding process.

But, that’s a lot of risk for a meager two seconds of time.

Here’s the reality of facial recognition so far.

First, airport facial recognition has almost nothing to do with increasing airport and airline security. Passengers are already screened for that by both humans and machines, sometimes to the point of harassment and criminal assault.

The truth is, so far face-scanning systems end up relying on human checks a lot more often than officials like to talk about.

Second, much like giving the IRS private information that they then “mistakenly” release, the Department of Homeland Security has already disclosed that photos of travelers were recently taken in a data breach, accessed through the network of one of its subcontractors.

Maybe, just maybe all of that risk, and violation of privacy would be worth it, if it worked. But the fact is, it doesn’t yet work quite like it’s supposed to.

But other passengers were not so lucky. On two flights he observed, the e-gate simply did not work for 15 percent of the passengers.

We as Americans seem far too eager to give up our individual liberty for the sake of “security”, or better put for a false sense of security.