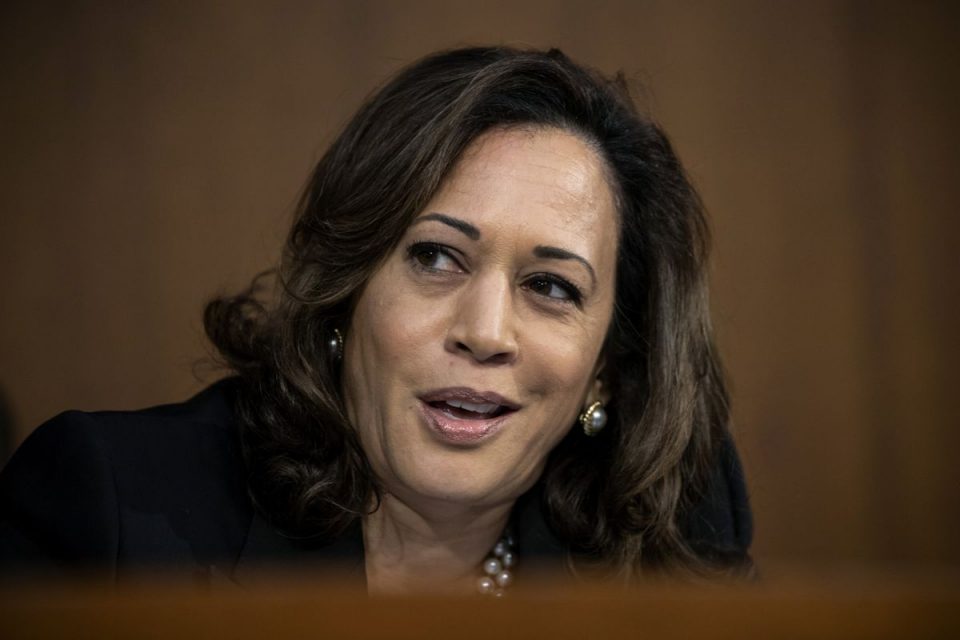 So she has announced this last ditch effort to stay relevant in the Democrat primaries.

That’s why Kamala Harris announced she will prosecute Trump citing this one bizarre reason.

Senator Kamala Harris (D-CA) is floundering right now in the race to take on Trump in 2020.

She has been damaged by charges of sleeping her way to the top, due to her affair with powerful California Democrat boss Willie Brown.

She also has been unable to gain traction among the far-left radical socialists she has recently been pandering to.

So now, she has taken a step she hopes will catapult her to the top of the Democrat scrum.

Sen. Harris, just this week, announced that her Department of Justice, if she is somehow elected president, would pursue obstruction of justice charges against Donald Trump.

“I believe that they would have no choice and that they should, yes,” Harris said during an NPR Politics podcast.

Harris’ comments echo those of House Speaker Nancy Pelosi (D-Calif.), who recently said she wants to see Trump in prison, and former congressman Beto O’Rourke (D-Texas), who said he too would prosecute the President if he wins the White House.

So, in actuality, Harris’ insistence that her DOJ will prosecute Trump is just more of the same from another Democrat presidential candidate seeing if she can out-crazy the last one.

Harris continued, “There has to be accountability, I mean look, people might, you know, question why I became a prosecutor. Well, I’ll tell you one of the reasons — I believe there should be accountability. Everyone should be held accountable, and the president is not above the law.”

Of course, this reasoning is completely ridiculous and bizarre since Harris refuses to say the same thing about Obama and Clinton, who even noted leftists like Bill Maher have stated obstructed justice, at the very least.

Harris knows full well she has no grounds for which to have the Department of Justice pursue charges against the President.

Instead this is the launch of her “lock him up” campaign push; she’s so desperate to get her name out there to a base that might not want to see the Establishment in Joe Biden get the Democrat nomination in 2020.

Unfortunately for Harris, this base is already split between Bernie Sanders, South Bend Mayor Pete Buttigieg, and Elizabeth Warren.

So now Harris, whose family were slave owners, has to overcome her family history, her torrid affairs and charges of prosecutorial misconduct to get back on top.

Of course the problems with Harris as a serious candidate don’t end with her wanting to abuse the power of the DOJ to jail a political opponent.

She also supports Bernie Sanders’ plan to allow terrorists the right to vote.

And she co-sponsored the bill that would allow illegal immigrants to work as staffers or interns in Congress, granting them potential access to classified information, like what happened with the former Chinese staffer of Diane Feinstein.

And, her record as a prosecutor was peppered with controversy as well, making it likely she would bring that incompetence and corruption to a DOJ under her administration as well.

And, as California attorney general, she ignored an accusation and the following lawsuit alleging sexual harassment by a top aide in her office.

Despite her failure to investigate or even pay attention to it, this case ultimately led to a $400,000 settlement and the resignation of that aide.

It turns out the aide was one of Harris’s closest professional, and possibly personal, confidants.

We will keep you updated regularly on the Democrat free-for-all to decide who will take on Trump in 2020.

Your Fears Are Real; the Deep State Knows Your Face