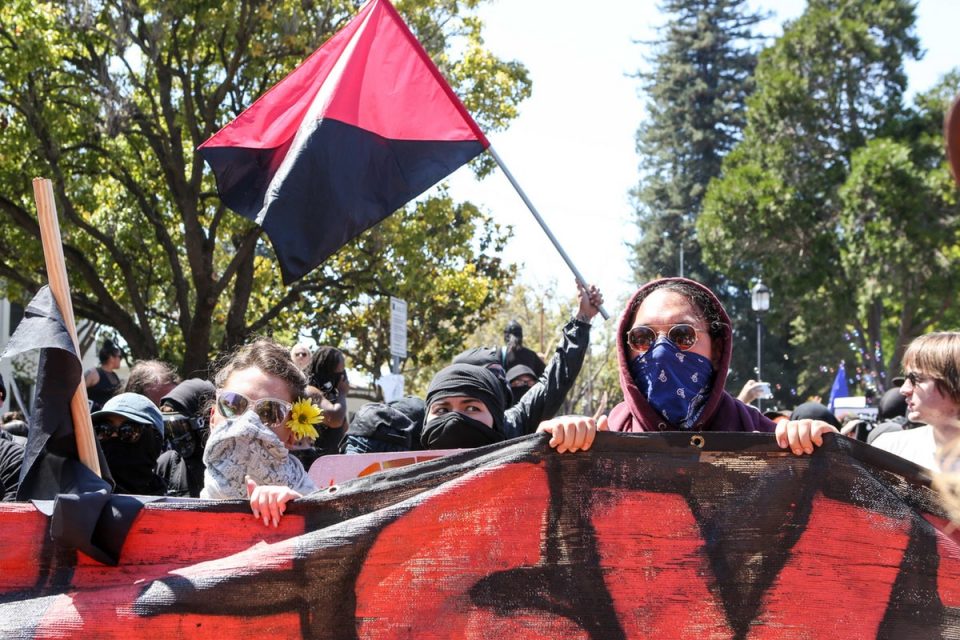 Antifa’s bloody terrorist tactics are continuing unabated while Democrat leaders and the media ignore, or even applaud them.

And police are told by leftist-elected officials to do nothing.

So violent Antifa attacks continue as Deep State Democrats sit back and watch.

Portland Oregon is the latest city to welcome the violent, socialist terrorist group known as Antifa.

Though these masked thugs claim to be anti-fascist, the fact is their tactics and violent nature are straight out of Adolf Hitler’s handbook.

And their trip to Portland was no different.

At least three people were arrested and several others were reported injured, as members of Antifa and other leftist groups clashed with members of the Proud Boys and other conservatives around downtown Portland, Oregon.

One of those injured was Andy Ngo, an independent journalist who was attacked by Antifa members, and hospitalized with a brain injury.

Ngo later posted a photo of himself from a hospital, with bruises, cuts and scratches on his face. And his attorney Harmeet Dhillon took to Twitter to go after those journalists who were actually gloating about the attack.

Update to @MrAndyNgo supporters — he is being admitted to the hospital overnight as a result of a brain bleed. You sick “journalists” and other hacks gloating about this should be ashamed. As for the rest, please pray for @MrAndyNgo who we need back in health — brave man!🙏🏼🙏🏼🙏🏼❤️ https://t.co/XYVy4EbIzv

At least three people were injured seriously enough to require hospitalization and two police officers were pepper sprayed by the Antifa thugs.

Of interest to many is the fact that the police were clearly ordered not to interfere and only shut down the demonstration after police officers were attacked.

In fact, one of the injured said as he was being beaten the police just stood and watched.  He was later hospitalized for head injuries.

And Andy Ngo, right after the attack said, “I just got beat up by the crowd–no police at all. They stole my GoPro and they punched me several times in my face and head—I’m bleeding.”

When police finally appeared, he asked them, “where the hell were all of you?”

Mr. Ngo went on to tell one officer that this was the third attack as he had already been assaulted twice earlier that day. He also told the officer he had reported the assaults but nothing had been done, and that someone stole his camera equipment with evidence of the attack. But the police did nothing.

Of course most of this went unreported by the media. Or, when reported it was reported as a conflict between Antifa and right-wing or far right groups.

And even though one of their own was brutally attacked, many journalists actually defended the violence.

Democrat presidential candidates were silent on the violence, likely fearing they would upset one of the most vocal and active parts of their constituency.

Their silence is coming at a great cost, as it emboldens these violent criminals to attack people at will, and with little or no reason.

In almost every case the only reason for the assaults was the persons saying something or wearing something the violent derelicts didn’t agree with.

And it’s only getting worse.

It is time for the FBI to declare Antifa a terrorist organization and shut them down.  Violence against people is not free speech.