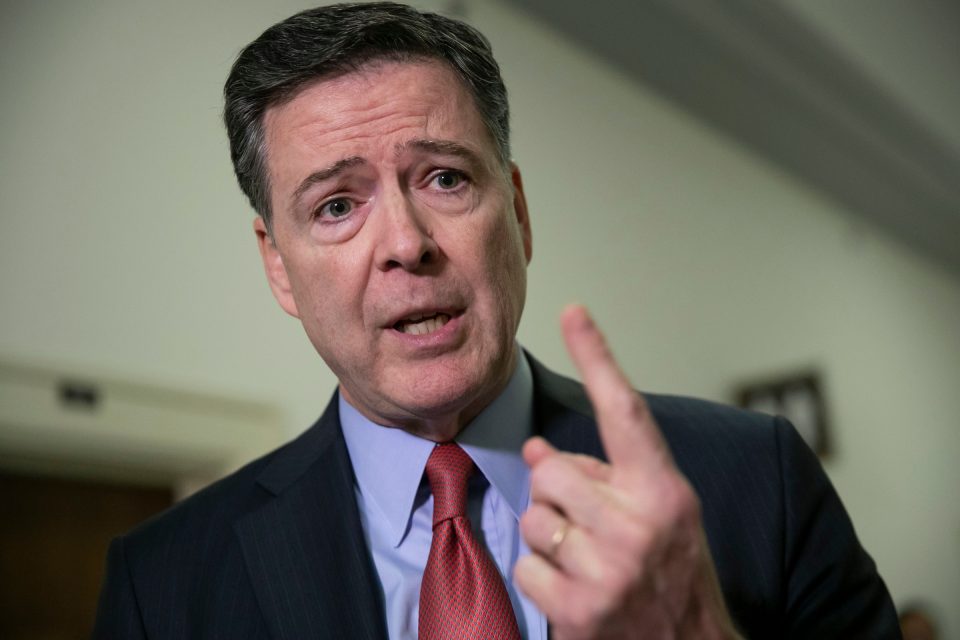 The Deep State is in a panic as the Trump witch hunt reveals who really committed the crimes.

And James Comey is in the crosshairs and may not go down quietly.

Because former FBI Director James Comey fears prison and he may take Obama with him.

It can be assumed that the prosecutors, FBI agents and other Obama Deep State officials never saw this coming.

First Donald Trump is cleared of any wrongdoing or collusion with Russia.

Now those very prosecutors and agents are in the crosshairs as documents being released show illegal actions by these Deep State officials.

And recent news reports indicated disgraced former FBI Director James Comey is becoming completely unglued over the determination to hold him, and other Obama officials, accountable for their illegal activities.

While most experts agree Comey was working on orders from the Obama White House, he is realizing all too late he is in the crosshairs of at least two corruption investigations.

Sources say Comey also has figured out the Democrat power brokers are only all too happy to allow him to be their fall guy if it means saving Obama’s “clean” reputation.

He knows that the stakes are huge for the hierarchy of the Democrat Party, so whatever can be laid off on him will be done if it saves those who directed him to take the actions he allegedly did on behalf of the Russians and the Clinton campaign.

Attorney General William Barr has made it clear he intends to get to the bottom of why Comey opened investigations into two presidential campaigns and whether any laws were broken in the process.

And in a scathing op-ed that appeared in The Hill, Kevin R. Brock, the former Assistant Director of Intelligence for the FBI wrote;

“In light of this, – Barr’s defiant determination to conduct proper investigations –  the fired former FBI director apparently has decided that photos of him on Twitter standing amid tall trees and in the middle of empty country roads, acting all metaphysical, is no longer a sufficient strategy.”

“No, Comey has realized, probably too late, that he has to try to counter, more directly, the narrative being set by the unsparing attorney general whose words in front of the Senate Judiciary Committee last week landed in the Trump-opposition world like holy water on Linda Blair. Shrieking heads haven’t stopped spinning since.

And so we’ve seen Comey get real busy lately. First he penned a curious op-ed in The New York Times. Then a Times reporter, with whom Comey has cooperated in the past, wrote a news article exposing an early, controversial investigative technique against the Trump campaign in an attempt to get out front and excuse it. Next, Comey is scheduled to be encouraged on a friendly cable news ‘town hall.’”

Comey’s op-ed makes it clear he considers himself a moral warrior taking on corruption and immorality at the highest levels.

This is Comey’s way of trying to get out in front of the story before it’s too late and try to hold together as much public support as possible.

The ironic thing is the continued Democrat attempts to “investigate” Trump further, are leaving Comey and others wide open for investigation, and likely prosecution.

It appears Mr. Comey should have chosen his friends more carefully.