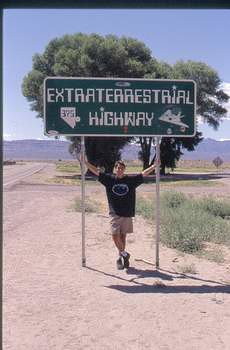 By now it’s a fairly well-known fact that a campaign was launched on Facebook to raid Area 51 next month.

What started out as a fake Facebook event created by a college student has grown into a state and national emergency.

But here’s why this state emergency is being promoted as the next “Burning Man.”

Matty Roberts’ Facebook event page, “Storm Area 51, They Can’t Stop All of Us,” has over two million RSVPs now.

Roberts’ call to arms on September 20th was jokingly created to reveal the existence of aliens being held at the military base.

Since the creation of the page, the U.S. Air Force has issued a statement saying it will protect the base with any force necessary, and there have even been Pentagon briefings.

The Air Force left a tongue in cheek, but potentially very real threat.

“The US military has responded to the whole affair with characteristic humor. ‘[W]e would discourage anyone from trying to come into [an] area where we train American armed forces,’” one press officer told the Washington Post.

“The US Air Force always stands ready to protect America and its assets.”

Although most of the individuals who signed up for the event were adding to the joke, if even a small fraction of people show up to the military base, who knows what will happen.

But now Matty Roberts has created an actual event from the faux-raid—and he’s calling it Alienstock.

So far, he and his group have secured a permit from the county government and are working to find space for the potentially large amount of attendees.

“The locals are not on board, nobody asked us, and we don’t appreciate anyone threatening to take over our town,” Joerg Arnu, a local resident, told Time. “I’ll do anything in my power to prevent this.”

The website for Little A’Le’Inn, Rachel’s only inn, cautions visitors to drive carefully. “When the sun starts to set the cows like to cross over the roadways and can be hard to see.”

Local law enforcement are reportedly planning to shut down the roads into Area 51 to keep out anyone actually attempting a raid.”

According to the Alienstock website, the festival is scheduled for September 20-22nd and has very strict rules for attendees.

These rules include the banning of drones, and instead promotes an area for believers to gather and celebrate all things aliens.

The website also says the festival will include “live music, great food, and camping experience.”

According to alienstockfestival.com, however, the event is being hosted “Burning Man” style and the creators of the event want to leave the area cleaner than it was found in efforts to protect the earth.

For now, it seems to be just another festival—but only time will tell whether or not this event will turn into a disaster.