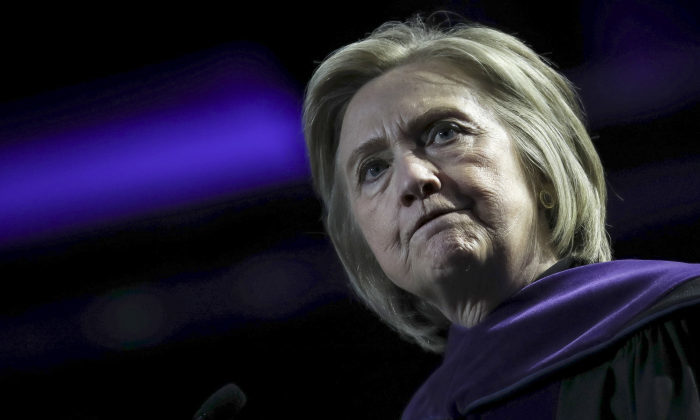 If there’s one thing true about the Clintons, it’s that scandal has followed them for more than 40 years, ever since their humble beginnings ripping people off in the backwoods of Arkansas.

And while you’d think Epstein’s “suicided” body, Benghazi, the Russian uranium deal, or even Vince Foster’s suicide would be the biggest scandals the Clintons have faced…

The truth is, Hillary Clinton is scared to death this scandalous fact will come up in the impeachment inquiry.

And this fact won’t just haunt Hillary, it could seriously damage the chances for the Democrats to impeach Trump and have him removed from office.

And keep in mind, there is probably no one on earth who’d like to see Trump impeached more than Hillary.

Following her embarrassing loss in 2016, you almost can’t blame her – almost.

But in an interview with People magazine, Hillary claimed she had to think about it for a long time before deciding impeachment proceedings would be worthwhile.

“I’m in favor of moving toward impeachment,” she told the magazine. “I did not come to that decision easily or quickly, but this is an emergency, as I see it. … This latest behavior around Ukraine, trying to enlist the president of Ukraine in a plot to undermine former Vice President Biden or lose the military aid he needs to defend against Trump’s friend, Vladimir Putin — if that’s not an impeachable offense, I don’t know what is.”

But here’s where things get murky.

Apparently, the whistleblower who brought the Ukrainian conversation into light is represented by the same lawyer who once worked closely with Hillary Clinton and Chuck Schumer.

“Andrew Bakaj, now a managing partner at the Compass Rose Legal Group, interned for Schumer in the spring of 2001 and for Clinton in the fall of the same year, according to Bakaj’s LinkedIn page. More recently, Bakaj has worked as an official in the CIA and Pentagon and specializes in whistleblower and security clearances in his legal practice.”

This information paints a picture that seriously undermines the credibility of the anonymous informant.

If the only information the House is basing impeachment on is the word of an informant whose lawyer used to work for Trump’s political adversary, it puts impeachment on shaky ground.

Once the Republicans in the Senate piece these facts together for the public, it will be undeniable that impeachment is a politically motivated scam.

That alone should be enough to cause voters to lose faith in the Democrats.

However, there’s even more that weakens the Democrats position.

“The intelligence inspector general decided the complaint is “credible” and “urgent,” but officials at the Department of National Intelligence say otherwise due to the lack of evidence undergirding the complaint and have refused to release it to Congress. The anonymous whistleblower has also admitted to not having firsthand knowledge of the conversations between the president and Zelensky.”

Now that all these truths are beginning to come out, the likelihood that Trump will be impeached is looking like a joke.

The Democrats just shot themselves in the foot – and it’s too late to turn back now.

Supreme Court Could Be Putting An End to College Campus Censorship