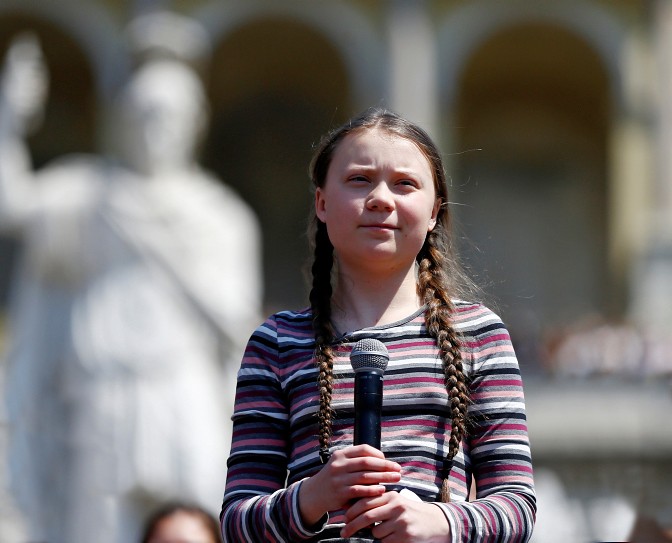 The ultimate goal of the Deep State is to gather as much power and wealth for themselves so they can live a life of pleasure and luxury off the backs of hard-working Americans.

They’ve got their hands in everything, working to enslave people and manipulate every aspect of life to see their dreams come true.

And they’re willing to kill as many people as necessary to guarantee this one impending disaster doesn’t ruin those plans.

The truly tragic aspect to this seemingly wild claim is the Deep State has managed to convince the vast majority of the United States and much of the developed world that if we don’t do something about this existential threat, all 8 billion people living on this planet will die.

That threat, of course, is global warming.

Just last week, the Deep State sent one creepy ‘Child of the Corn’ puppet to the UN to demand something be done immediately to fix global warming… or else.

Greta Thunberg, a young and impressionable, if somewhat Addams family-esque 16-year-old Swede, appeared before the U.N. General Assembly last week to scold all the represented nations about their failures to protect the planet.

Thunberg chastised, threatened, and shamed these leaders of free nations for using economic gain to enrich their countries to the detriment of the environment.

She called for the countries to make drastic, economy-killing, socialist changes that will “save the Earth” before its 12 years is up and we all perish.

But Thunberg didn’t state that the most effective means to “save humanity” would be through the reduction of fossil fuels or the decrease in plastic straws.

No, it’s through a cleansing of the existing population. And this cataclysmic solution is something that has wide support amongst left-leaning researchers at leading universities today.

For instance, Paul Ehrlich at Stanford University says that in order for the globe to sufficiently support human life, we must reduce the population from 8 billion citizens down to 1-2 billion.

No amount of birth control will allow for this.

Eve Andrews, writing for the left-leaning publication Grist, shows that the concept of depopulation isn’t a novel idea for the left.

“The issue of how you arrive at fewer humans is decidedly less basic. Some entity has to dictate which humans get to produce more humans — or in an even more macabre scenario, which humans stay and which humans go. The way that societies have made that decision, historically, is by ranking the worth of different groups — usually by ethnicity, often by sexuality, frequently by mental and physical ability — and sterilizing those deemed to be of lower value. In the U.S. alone, Latinos, Native Americans, African-Americans, and the mentally ill and disabled have all been victims of this dehumanizing practice, shockingly all as recently as the 1970s.

“A main argument for why those coerced sterilizations were done was to alleviate the pressure that population growth was putting on state resources, because these groups were disproportionately receiving welfare,” Jade Sasser, a professor of feminist political ecology at the University of California, Riverside, and author of On Infertile Ground: Population Control and Women’s Rights in the Era of Climate Change, told me.”

For the left and the adherents of Deep State philosophy, humans aren’t to be viewed as equals.

Because of varying stratification in worth, those who don’t serve a higher purpose would be determined as disposable.

Genocide is the answer, though it won’t quite look like the wanton massacres of the past.

In the future, people deemed unfit will be subjected to medical procedures that render them incapable of reproducing offspring, or, their children will be aborted before having the chance to escape the birth canal and breathe their first breath.

This is why there’s such an incredibly tight focus on climate change and the impending doom that lies ahead.

If the elite can’t convince the world they’re already dying, they’ll have a rough road ahead convincing people it’s time to kill off all their children.

Conversely, we’re already doing a wonderful job of that.

Since 1969, mothers have aborted more than 70 million children to save them from a “life of misery.”

So, one could say we’re already well on our way.

Regardless, deciding that the existence of certain human beings are a problem rather than our equals – and using a false-demon of worldwide catastrophe to eliminate them – is pure evil.

Journalism is Dead – Is Social Media to Blame, or is the Media Itself the Reason?