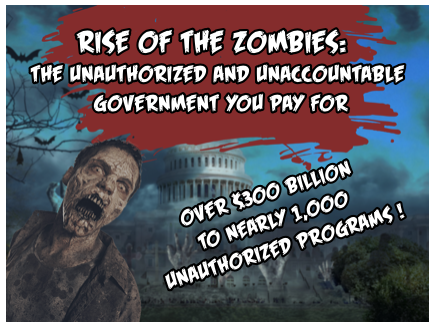 It’s no secret the federal government is too big, spends too much, is out of control, and that both parties are to blame.
Most Americans know the government wastes billions of dollars on unnecessary, outrageous, and unconstitutional programs.
But now Senator Rand Paul is revealing just how bad it is with these “zombie” programs eating away at our freedoms.
Since winning the Senate in 2010, Senator Rand Paul (R-KY) has led the fight to reign in out-of-control federal spending.
Continuing his efforts to reform government and reduce wasteful spending, Senator Paul (who is chairman of the Subcommittee on Federal Spending Oversight and Emergency Management, as well as the Homeland Security and Governmental Affairs Committee) held a hearing on the day before Halloween, aptly named, “Rise of the Zombies: The Unauthorized and Unaccountable Government You Pay For.”

As Senator Paul said in his opening statement:

“We are here the day before Halloween to talk about zombies. These are not the kind of zombies we see on The Walking Dead, or what we might see on our doorstep tomorrow evening. In many ways, these zombies are far scarier. These are zombie government programs that have sometimes not been reauthorized for decades.”

One example of these zombie programs is the Inter-American Foundation (IAF), which has used American taxpayer dollars on projects like teaching circus arts in Argentina, helping deported illegal immigrants start businesses (including money going to criminal immigrants), and jumpstarting the Haitian film industry.

Created in the 1960s, the Inter-American Foundation’s last reauthorization from Congress was over 30 years ago.

But the Inter-American Foundation is just one of many zombie programs of frightful and unconstitutional government spending.

In 2019’s fiscal year, the federal government spent over $300 billion on nearly 1,000 different programs that have yet to be reauthorized by Congress.

The hearings also highlighted what can and should be done by Congress to protect taxpayer resources from the zombie apocalypse of spending.

U.S. Representative Cathy McMorris Rodgers (R-WA-5), who has sponsored the USA Act in the House of Representatives, testified saying, “Congress isn’t using its power to exercise the power of the purse to hold these programs accountable on a regular basis, and it needs to change.”

Kevin R. Kosar (vice president of policy at R Street Institute), Jonathan Bydlak (president of the Institute for Spending Reform), and James A. Thurber (Distinguished Professor of Government at American University) testified on the second panel.

Of course one solution to this growing problem is Dr. Paul’s own Legislative Performance Review Act, which he’s introduced in multiple sessions of Congress.

This bill would force Congress to regularly review federal programs due for reauthorization and either justify them or drive a stake through them.

Here’s How to Best Protect Yourself Online