The mad rush to impeach Donald Trump started in 2016 just after his election.

For three long years, the American people were subjected to leftist impeachment drivel spouted by the Democrats and the fake news media.

And now, thanks to Nancy Pelosi and her radical Democrat Party, Donald Trump has finally been impeached – and re-elected – all in one day.

Donald Trump was never meant to be President.

In fact, almost no one could’ve predicted it.

But his victory over crooked Hillary Clinton is a moment that will go down in American history- just like the “Dewey Defeats Truman” headline by the Chicago Daily Tribune on November 3, 1948. 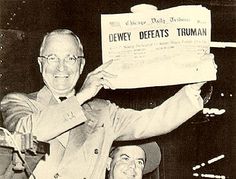 And literally from the moment Trump won, the Deep State started their plans to remove him.

In fact, when some of the more astute Deep State political observers realized (to their absolute horror) that Donald Trump could actually win, the anti-Trump and “Never-Trump” movement began to form.

They devised a plan to promote a false dossier and have the FBI use it to illegally obtain FISA warrants to spy on the Trump campaign.

Democrats then began strategizing how best to remove Trump and filed articles of impeachment as soon as he shocked the world and defeated Hillary Clinton.

And they were joined by a rag-tag band of socialists, leftists, so-called “libertarians” like Justin Amash, the Koch brothers, and neo-cons like Bill Kristol.

This band of Deep State pawns also included a number of DC “Republican” consultants like Rick Wilson who were ticked off Trump didn’t send any money their way during his campaign.

Though many in this group claimed to be conservative, their true colors were exposed very early on.

Bill Kristol, for example – though always a fan of bombing brown, black, and yellow people – claimed to be pro-life on the abortion issue.

Yet, as Trump proceeded to do more for the pro-life movement than ANY President – including the sainted Ronald Reagan – Kristol still attacked.

It became apparent that no matter what Trump did, this group of socialist bedfellows would push forward on trying to remove him.

The first articles of impeachment were introduced in 2017 by Democrats Al Green and Brad Sherman.

Impeachment has been pushed on the grounds of alleged “crimes” such as violations of the Foreign Emoluments Clause of the Constitution, collusion with Russia during the 2016 campaign, obstruction of justice during the Russia collusion investigation, and accusations of “associating the Presidency with White Nationalism, Neo-Nazism and hatred,” which formed the basis of another resolution for impeachment brought on December 6, 2017.

All were proven false.

In fact, the entire Russia collusion hoax was found to be perpetrated by Obama officials in collusion with the Clinton campaign, intelligence community, and both Democrat and Republican officials like former Deep State favorite, RINO Senator John McCain.

And finally, three years later, the House has voted to impeach.

On to the Senate, right?

Well not so fast.

It now appears Speaker Pelosi may not send the articles of impeachment to the Senate afterall because she knows Trump won’t be convicted.

It seems Pelosi has realized that the only thing her impeachment efforts have accomplished is the one thing they’ve feared the most – the re-election of President Donald Trump.