One self-described “conservative” journalist even called for a national holiday.

Conservatives and all honest Americans have known for decades that the vast majority of the nation’s media is nothing but a bunch of shills working for the Democrats and far-left radicals.

Year in and year out, Americans are bombarded with one-sided, liberal drivel, many times purposely skewed – if not wholly made up to propagandize for the left.

It can be seen in both what they report and what they choose to ignore.

One thing the media hasn’t ignored of course is the sham, and very likely unconstitutional, exercise known as the impeachment of America’s 45th President, Donald Trump.

As expected, all Republicans voted against impeachment and all but a few Democrats voted for it.

None of this was news.

And certainly none of this was cause for celebration, no matter how you feel about President Trump.

Impeachment should be a somber, thoughtful process whenever it is undertaken.

But not for self-described “conservative journalist” Jen Rubin of The Washington Post (by way of Berkeley and the neo-con rag The Weekly Standard).

Rubin is the one journalist always paraded out by Never-Trumpers looking for even a shred of credibility with actual conservatives.

Unfortunately, all Jen Rubin really brings to the table is that she is not as leftist as her masters at The Washington Post.

And now, Ms. Rubin proved what a joke she really is with this tweet she posted right before the impeachment vote passed:

We should make Dec 18 a holiday (like Flag Day): Impeachment Day, in which we honor the heroes and read in every public square the articles of impeachment.

A national holiday? Who is Rubin kidding?

Does she really believe the impeachment vote of a U.S. President is worthy of the same status as Memorial Day and Veterans’ Day?

Is Rubin really saying we should be celebrating impeachment like Independence Day or Christmas?

Or is Rubin just playing to the cadre of Never-Trump neocons who have an almost psychotic need to feel superior to actual conservatives?

Still, Rubin was not the only Washington Post staffer to make the news after the impeachment vote.

Not to be outdone by Rubin, Washington Post reporter Rachel Bade shared a picture on Twitter of the celebration dinner being held by Washington Post political staff after the vote. 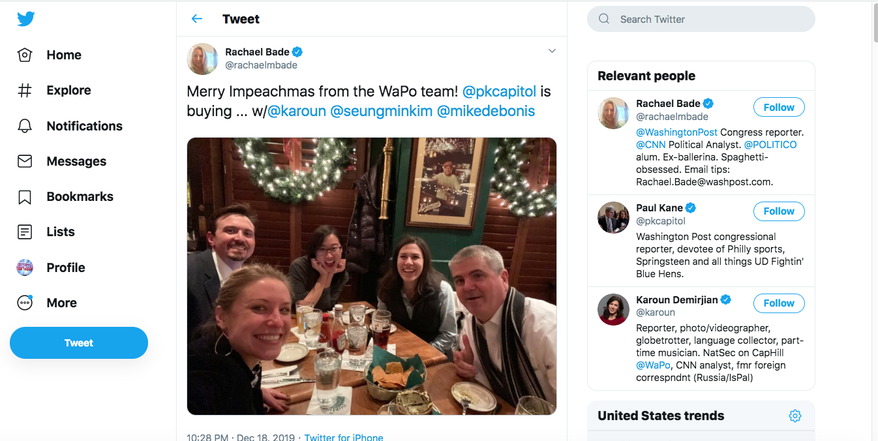 “Merry Impeachmas from the WaPo team!”

This is what passes as “journalism” today – and it’s why many are using the hashtag #JournalismIsDead in social media posts.

Rachel eventually deleted her tweet, claiming it was “being misinterpreted” by some people.

I’m deleting a tweeting tonight that is being misinterpreted by some as an endorsement of some kind. To be absolutely clear, we at the Post are merely glad we are getting a break for the holidays after a long 3 months. I will retweet the group photo w/ a better caption !

But the American people still want to know – if “Merry Impeachmas” is not an endorsement to impeach our President, just what is it exactly?

What other possible meaning could it have?

Unfortunately for Ms. Bade and the always arrogant Post political team, it appears her attempt to “fix” things may have only made the backlash worse.

But Bade and the Post are just following the lead of all the other so-called “mainstream” media outlets by finally admitting they’re the public relations arm for the Democrat Party.

Because the only way most of these outlets can stay in business is to cater to their socialist paymasters.

Donald Trump Was Impeached and Re-elected All In One Day, Thanks to Nancy Pelosi