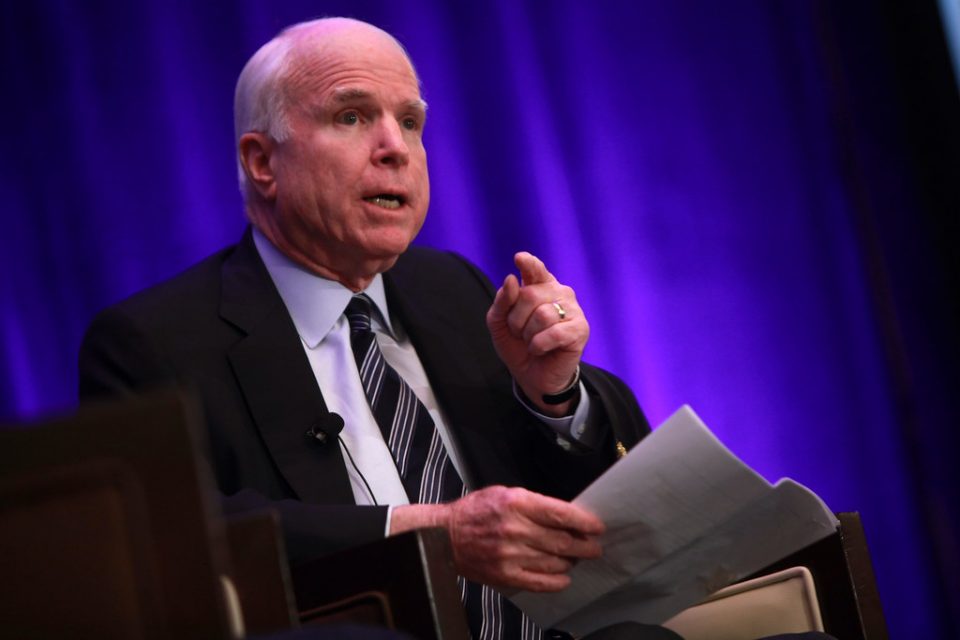 Though he was severely ill and would soon die of brain cancer, his hatred of Trump was so deep he still committed appalling acts of betrayal.

In fact, John McCain’s last major role was acting as the main culprit in the Deep State coup attempt against Donald Trump.

The late Senator of Arizona held a mixed record of service to his country.

During the Vietnam War, he almost died in the 1967 fire on the USS Forrestal. Later in October 1967, during a bombing mission over Hanoi, he was shot down, seriously injured, and captured by the North Vietnamese.

He was kept as a prisoner of war until 1973 and was subjected to severe torture and sustained injuries that left him with lifelong physical disabilities.

McCain retired from the Navy as a captain in 1981 and moved to Arizona.

While claiming to be a conservative, many conservative leaders agree McCain may have done more harm to the conservative movement and the nation than any other Senator had in decades.

McCain also had scandals. He cheated on his wife, who had been crippled in a car accident, and later married Cindy Lou Hensley, the daughter of a beer magnate.

While his children did not attend his wedding to Cindy, it was attended by liberal U.S. Senator William Cohen of Maine and Gary Hart of Colorado.

He was also investigated in a political influence scandal of the 1980s as one of the Keating Five, as well as belonged to the bipartisan and liberal “Gang of 14” that had played a key role in liberal judicial appointments.

He refused to support Republican presidential nominee Donald Trump in 2016 and cast the deciding vote on defeating the Obamacare repeal in 2017.

So it should come as no surprise that McCain was also the main bridge between Christopher Steele’s infamous dossier and disgraced former FBI Director, James Comey.

According to the Justice Department’s Inspector General report, Senator McCain provided Comey with five separate reports from Christopher Steele that purported to “prove” collusion between Trump’s campaign and the Russians.

Of course, we now know Steele’s so-called “evidence” was Trumped Up!

In fact, according to the IG’s report, McCain did this even after Steele’s dossier had been dumped by the FBI as unreliable and Trump had already been elected.

In addition, McCain got the Steele reports from Fusion GPS, showing that he knew he was circulating political opposition research and not verified intelligence documents.

In short, it was liberal Senator John McCain who got the ball rolling on the effort to remove a duly-elected President of the United States.

Clearly his oath to the U.S. Navy and the U.S. Senate to support and defend the Constitution – which he’d already violated with his McCain-Feingold anti-First Amendment law – was completely abandoned in his last days as well.

In fact, some could say that this decorated war veteran and U.S. Senator was more than just a sell-out, he was a traitor.