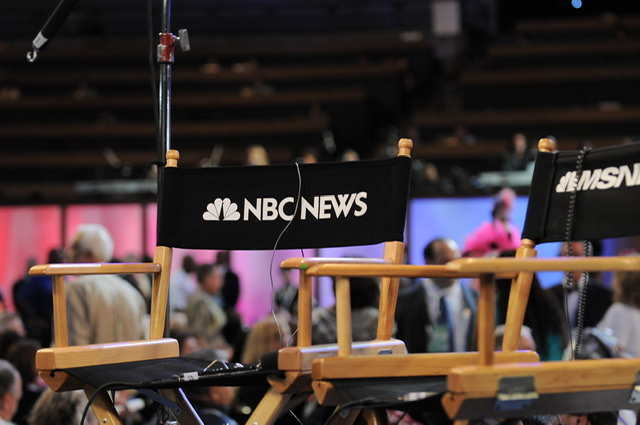 The mainstream media is nothing more than the public relations arm of the radical left. Ever since the election of Donald Trump ruined their coronation of Hillary Clinton, the media has stopped even pretending to be fair.

And now Meet the Press host Chuck Todd said the one thing that proves just how out of touch the media is.

Media bias is real. And it’s been around longer than most people think.

It’s not just that they’ll spin stories and events, but they’ll ignore important news stories if it doesn’t fit their narrative.

This kind of bias, while not new, is worse than ever before.

Distrust of the media is at an all-time high as Americans rank them right there with used car salesmen, lawyers, and politicians.

That’s why millions of Americans are choosing to turn off networks like CNN, ABC, NBC and it’s little sister, MSNBC.

And despite the overwhelming evidence of media bias (especially in their coverage of President Trump), MSNBC’s Chuck Todd just proved they’re clueless too.

Todd recently announced on air that MSNBCs daytime newscasts are totally free of any “editorial point of view.”

The Meet the Press host made this remarkable claim just after MSNBC’s own Katy Tur had lambasted President Trump for holding campaign events during the coronavirus pandemic.

She made these rather biased comments during an interview with Trump campaign communications director Tim Murtaugh.

In response, Murtaugh rightfully accused MSNBC of complete hypocrisy for criticizing the President’s rallies while lauding the massive BLM demonstrations.

“When it is a large gathering with a political message that MSNBC would agree with, suddenly safety measures are really on the back burner,” Murtaugh stated.

Tur then replied, “We’ll note the president is the only one having indoor rallies or events of that scale in the entire country.”

“We just saw the images of those rallies, people were not wearing masks inside the president’s rally, no social distancing being practiced. We saw the signs being removed from seats. You can say you handed out hand sanitizer and gave out masks,” Tur concluded.
“I appreciate that speech,” Murtaugh responded.

After a rather awkward pause, Todd ended the segment with his outrageous statement; “And just a reminder, for what it’s worth, there is no editorial view here on any of these newscasts on MSNBC in the daytime.”

Todd, like other mainstream media liberals, gets his back up anytime he or his network is rightfully accused of being biased and liberal.
Of course, Todd has an uphill battle given that MSNBC is competing with CNN for the title of the most biased news network.

But the actions of Todd and his network may speak louder than their liberal words.
Todd has benefited greatly from an internal NBC initiative to remove any negative or bad information from any Wikipedia pages.

The dinner wasn’t known to the public until 2016 when WikiLeaks leaked emails linked to Clinton campaign chairman John Podesta who had been invited to the dinner.

And Mediaite has reported on other WikiLeaks email that proved Congresswoman Debbie Wasserman-Schultz (D-FL) – while chairman of the DNC – used Todd as a go-between to demand MSNBC’s morning anchor Mika Brzezinski be less critical of the beleaguered Wasserman-Schultz.

In fact, the very subject line of her email to Todd read: “Chuck, this must stop.”
Yes, Chuck. The Congresswoman’s subject line at least was right.

This must stop. The bias, the lies, the ignorance, the hatred of average Americans, and the charade of a free and independent press. It all must stop.