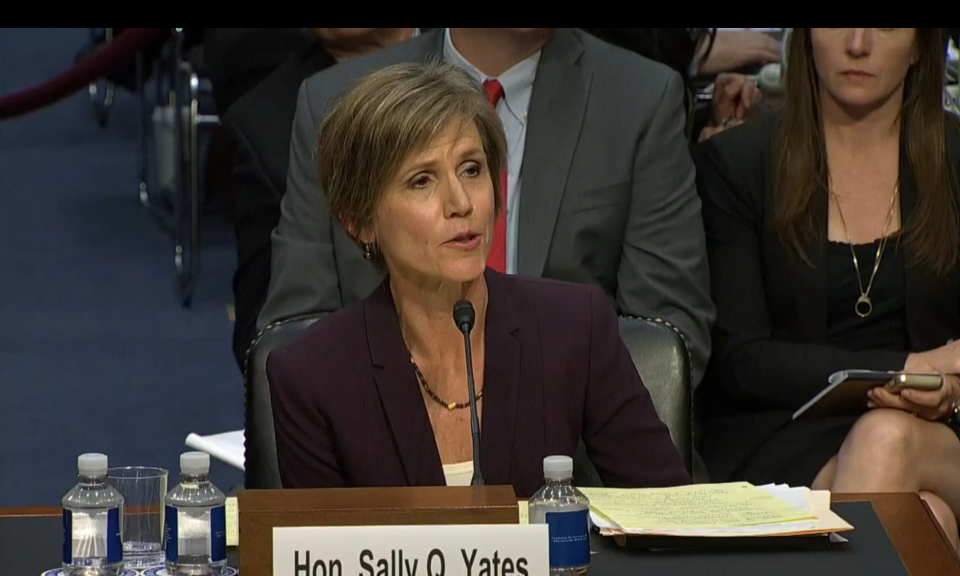 When a ship starts to go down, the rats scurry away, often crawling on top of each other and even drowning other rats to escape.

The same is true of Deep State operatives.

And former Obama Deputy Attorney General Sally Yates is a rat trying to save her own hide.

The Deep State is in trouble. As more information comes out about the despicable abuse of power by Obama’s administration, the players are scurrying to avoid possible prosecution.

The only real question is whether Senator Lindsey Graham and the other moderate Republicans will actually hold these criminals accountable.

Last Wednesday, she stated in a Senate Judiciary Committee hearing that she was upset former FBI Chief James Comey had arranged and held an interview with former national security adviser Michael Flynn without consulting her first.

Yates testified (under oath), “I was upset that Director Comey didn’t coordinate that with us and acted unilaterally.”

“You could use that term, yes,” she said.

It appears Sally Yates is the latest of Obama’s henchmen trying to remove the spotlight from her involvement with the illegal spying on the Trump campaign and other conservative groups.

But Graham stuck to the Flynn investigation. Specifically, the Comey interrogation of General Flynn.

Comey had two FBI agents interview Flynn at the White House on January 24, 2017 regarding his contacts with U.S. Russian Ambassador Sergey Kislyak.

Flynn would eventually and unfortunately plead guilty to making false statements during the interview due to literal threats made by DOJ prosecutors against Flynn and his family.

This kind of intimidation and aggressive prosecutorial misconduct ran rampant during the Obama years, and the Flynn case was just the tip of the iceberg.

Now that the illegal activities have come to light, the Justice Department has since decided to drop all charges against the retired general.

And the rats have decided to start deserting the sinking Obama Deep State ship.

Comey has said he and the FBI intentionally left the DOJ out of the loop on the Flynn investigation.

Former Deputy Director of the FBI Andrew McCabe wrote in a memo that he advised Flynn not to have his lawyers present during the “interview.”

Even more shocking, the FBI Chief of Counterintelligence at the time, Bill Priestap, wrote in a memo before the interview that he wondered if the goal was to get Flynn to lie to get him fired or even arrested.

The FBI investigated Flynn as part of “Crossfire Hurricane”, the illegal and unconstitutional counterintelligence investigation of the Trump campaign.

Comey, McCabe, and other Obama FBI officials signed off on the decision in mid-August 2016 to use an FBI special agent to observe Flynn for “investigative purposes” during a national security briefing given to then-candidate Donald Trump.

That special agent would later take part in the Flynn interview alongside the disgraced Peter Strzok, who was deputy chief of counterintelligence at the time.

Comey told the House Intelligence Committee back in March 2017 that the agents weren’t sure whether Flynn intentionally lied during his FBI White House interview or not.

While Flynn initially pleaded guilty in December 2017 to falsely denying that he had discussed U.S. sanctions against Russia with Kislyak, he since retracted his admission of guilt, saying he regretted pleading guilty.

Unfortunately, this treatment of Americans, especially conservatives and patriots, was widespread during Obama’s reign.

Political witch hunts were carried out against men like Flynn, against campaigns, against conservative and Christian organizations, and a number of Americans were wrongly targeted and, in some cases, convicted of crimes that don’t even exist.

We here at Deep State Journal are committed to bringing these issues to light and holding accountable those government officials who abuse their power and target innocent Americans merely because of their political leanings.

We can only hope Senator Graham and others will do the same.