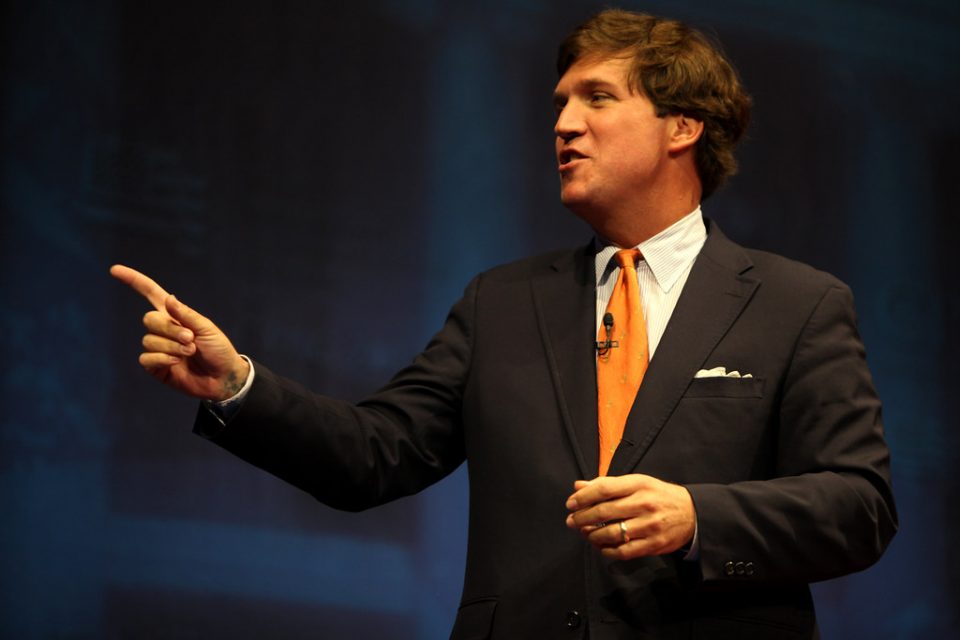 The Fox News host has long been known for his controversial take on things.

And for almost never backing down, even when facing incredible pressure.

But now, Tucker Carlson has said the one thing that could mean the end for him.

Tucker Carlson is certainly no stranger to controversy.

Remember this is the man who emceed Ron Paul’s ‘Rally for the Republic’ in 2008 to a rousing crowd of more than 15,000 libertarians, conservatives, and constitutionalists.

And this is also the man who showed up at a Ron Paul speech with a bordello owner and two hookers.

His time on Fox has been just as entertaining, if not quite as scandalous.

And to be clear, for the most part, Tucker Carlson has stuck to his conservative/libertarian roots and remained a dedicated spokesman for the cause.

And he has certainly found himself in the crosshairs of CNN and their masters in the radical left.

He has even run afoul of government stooges a time or two.

But now, Tucker may have gone too far for the Deep State, and Twitter was lit up with people calling for prayers for the Fox host.

In an explosive segment on Fox News Tuesday night, he alleged that federal law enforcement agents may have been responsible, at least in part, for actually organizing the Jan. 6 riot at the U.S. Capitol.

This is a fact which, if true, raises serious questions about the federal government’s response to the events that day.

Carlson bluntly asked, “Speaking of January 6th, why are there still so many things, basic factual matters, we don’t know about that day?”

“Why is the Biden administration preventing us from knowing? Why is the administration hiding more than 10,000 hours of surveillance tape from the U.S. Capitol? What could possibly be the reason for that? We need to get to the bottom of it. They could release those tapes today, but they’re not. Why?”

Then Carlson alluded to the presence of several so-called “unindicted co-conspirators” in the Justice Department’s charging documents.

These individuals, often identified as “Person One,” “Person Two,” and so on, seemed to play a significant role in the orchestration of the attacks that day, yet have not been charged with any crimes.

“The government knows who they are, but the government has not charged them. Why is that? You know why. They were almost certainly working for the FBI. So, FBI operatives were organizing the attack on the Capitol on January 6, according to government documents. And those two are not alone,” Carlson asserted.

He also pointed to an interesting exchange between Senator Amy Klobuchar (D-MN) and FBI Director Christopher Wray back in March, in which Wray seemed to confirm that FBI agents were actively infiltrating “dissident groups.”

Carlson suggested that the FBI was probably involved with the three groups recognized as being involved in the Capitol riot – the Oath Keepers, the Proud Boys, and the Three Percenters.

“There’s a huge difference between using an informant to find out what a group you find threatening might do, and paying people to organize a violent action, which is what happened, apparently according to government documents, on January 6,” Carlson said.

If he is right, the FBI has once again crossed a line, a line they’ve crossed before as Carlson correctly pointed out.

Most recently during the thwarted kidnapping plot of Michigan Gov. Gretchen Whitmer-(D).

Carlson’s accusations garnered immediate backlash from left-wing media publications, which labeled his claims “wild,” “baseless,” and of course, a “conspiracy.”

Not surprisingly, Carlson doubled down on his claims the next night.