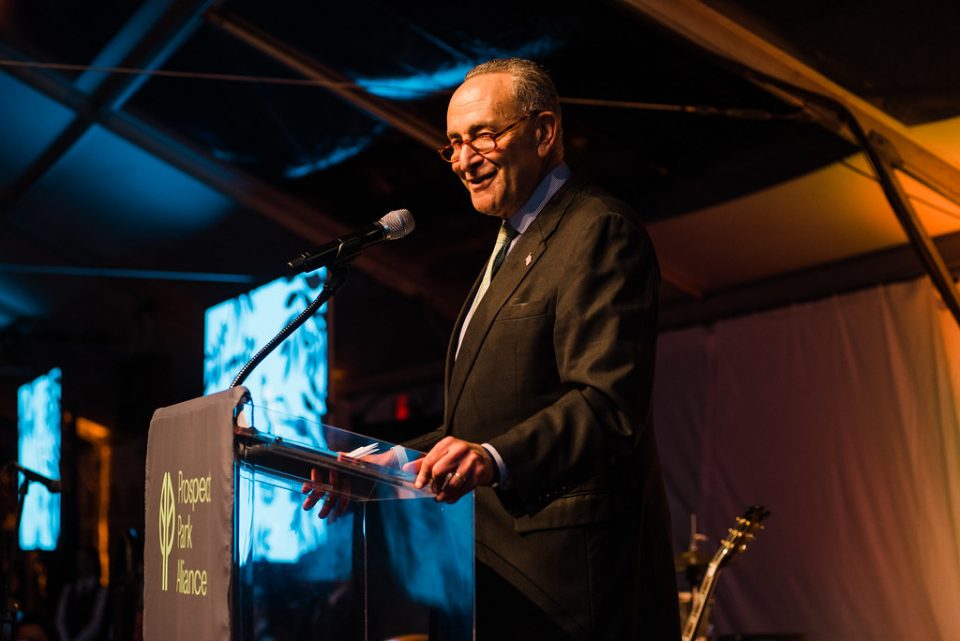 Biden’s vaccine mandates continue to cause the loss of qualified employees around the country.

And as employees keep fighting back against the mandates, it’s only going to get worse.

Now Chuck Schumer wants to “send in the dogs” to replace these federal workers.

The Southwest Airline “Fauci Flu” sick-out last weekend was the latest example of employees around the country fighting back against Biden’s unconstitutional vaccine mandate.

And with more and more employees saying “NO” to the jab, major businesses and government agencies are having to decide how to replace them if they fire them.

Well, New York’s ultra-liberal Senator Chuck Schumer has come up with a plan that could land him in the doghouse.

According to Schumer, the TSA should simply use its canine teams to keep airport security lines moving if there is a worker shortage due to the federal COVID vaccination mandate.

Schumer’s comments come as Americans are beginning to worry about their holiday travel plans.

As Schumer puts it, “If TSA lags in jabs, send in the dogs.”

This comment was made after word got out that 40 percent of TSA employees remain unvaccinated.

“There is no reason on God’s green Earth why anyone — let alone a TSA agent — shouldn’t have the vaccine,” Schumer said.

“Now if the agency plans now with contingencies, including the deployment of the canine dog teams, wherever the vaccine rates are impacting staffing and security, travel headaches can be avoided.”

“The canine teams are really effective; they can help secure national security and allow TSA agents to more effectively and efficiently screen individuals for explosives. It really works and moves the lines along.”

Schumer also said the TSA should “particularly look at New York” both because of the high volume of travelers that pass through its airports and the relatively low vaccination rates among New York City’s TSA work force.

The possibility of a shortage of TSA workers could leave Thanksgiving travelers in a real bind – and experts are already predicting a large increase in Americans traveling this holiday season.

TSA spokesman Robert Langston tried to deflect Schumer’s comments by saying that the 40 percent of unvaccinated employees include employees who have not yet updated their vaccination status with the agency, so it’s not an entirely accurate reflection of overall vaccination rates.

While this may be true, the scary part is realizing that how far the government is willing to go to force Americans to get the vaccine could still be in its infancy.

It also begs the question – will these dogs also be executing the aggressive pat-downs and strip-searches usually performed by TSA agents?

If so, you may want to consider a way to protect your more-vulnerable regions before you arrive at the airport!