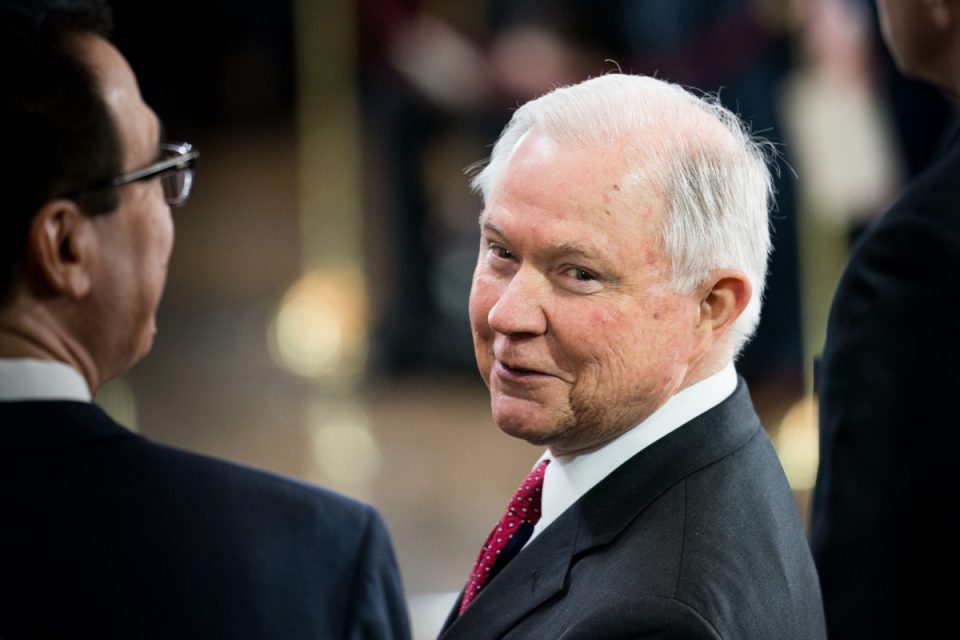 The Department of Justice is the eye of the Deep State storm.

Deep State agents within the department worked for the last two years to jail Trump supporters in an effort to bring down the President.

But you won’t believe how Jeff Sessions crossed this line by stabbing Donald Trump in the back.

Attorney General Jeff Sessions was the biggest disappointment in the Trump administration.

Sessions caved to the Deep State criminals and recused himself in the Russia investigation.

That move allowed Deep State saboteur Rod Rosenstein to appoint Robert Mueller to carry out the coup against the President.

He said if Sessions told him he would have recused himself. He would have picked a different Attorney General.

Sessions finally resigned one day after the midterm elections.

And on the way out the door Sessions stabbed Trump in the back one final time.

The Department of Justice revealed through a copy and paste error in an unrelated court case filing that they prepared charges against WikiLeaks founder Julian Assange.

In a case involving a suspect tied to Islamic terrorism and sex trafficking the DOJ mistakenly included language that told a judge “due to the sophistication of the defendant and the publicity surrounding the case, no other procedure is likely to keep confidential the fact that Assange has been charged.” The DOH also argued the charges would “need to remain sealed until Assange is arrested.”

The Deep State targeted Assange for personal destruction starting in 2010 when WikiLeaks published classified cables regarding the war in Afghanistan.

Many people believe the Deep State faked the sexual assault charges against him that forced Assange to seek refuge in the Ecuadorian Embassy in London.

But their thirst for revenge only grew after WikiLeaks published emails obtained from the Democrats.

Assange helped thwart Hillary Clinton and the criminal conspiracy supporting her from winning the White House.

And this all happened under Jeff Sessions’ watch.

WikiLeaks is a media organization.

Jailing Assange would be like jailing the President of Fox News.

In addition, Sessions did not prosecute any Deep State agents who leaked classified information to hurt President Trump.

A rogue operative in the government illegally leaked the classified information that former National Security Advisor Michael Flynn was recorded on wiretapped conversations with the Russian ambassador.

Instead, Robert Mueller jailed Flynn for lying to the FBI about the phone calls even though the FBI agents who interviewed him thought he told the truth.

Under his watch, the DOJ locked up Trump supporters left and right.

At the same time, Sessions looked the other way as criminals like Hillary Clinton, James Comey and Andrew McCabe were given free passes for a long list of law breaking.

Hillary Clinton ,in particular, belongs in a jail cell.

The Chinese and the Russians almost certainly hacked all of her emails.

By that standard no one “published” more classified information than Hillary Clinton.

But unlike Julian Assange, Clinton was a senior government official and not a journalist.

Jeff Sessions shameful legacy will be allowing a criminal cabal in the upper levels of government to plot against the American people while jailing individuals who supported his boss.