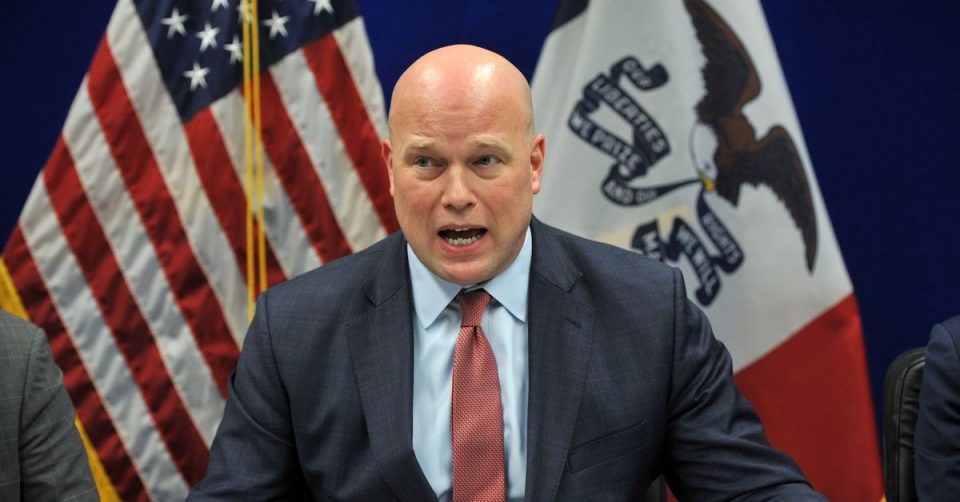 When Attorney General Jeff Sessions announced his resignation, the Deep State geared up for battle.

They knew Trump could replace the ineffective Sessions with a warrior who would stand up to the swamp and shut down Mueller’s rigged witch hunt.

Whitaker meets the requirements set by the vacancy act to hold the position.

He also served as U.S. Attorney in Iowa and is well qualified for the job.

Grassley issued a statement declaring “the Justice Department is in good hands during this time of transition.”

But the Deep State doesn’t care about Whitaker’s qualifications.

They panicked because Whitaker criticized Mueller when he was a legal commentator on television.

Rogue agents within the government know Trump put Whitaker at the DOJ to expose the criminal cabal working to subvert the will of the American people.

So the character assassins in the Deep State launched a smear campaign.

It began by attacking Whitaker’s Christian faith and accusing him of being a bigot.

A radical homosexual activist who served in the Iowa legislature claimed Whitaker targeted him with a witch hunt because Whitaker hates homosexuals.

At a forum sponsored by the Family Leader Whitaker stated judges who held a Biblical worldview would be better suited to perform well on the bench.

“What — how would they live their lives? Are they people of faith? Do they have a biblical view of justice, which I think is very important because we all know that our government—”

The moderator asked if that meant New or Old Testament.

“I’m a New Testament—and what I know is, as long as they have that worldview, that they’ll be a good judge,” Whitaker responded.

Whitaker then questioned the ability of judges with secular worldviews to properly rule on cases.

“And if they have a secular worldview, where this is all we have here on earth, then I’m going to be very concerned about how they judge you,” he explained.

The Deep State planted these quotes with left-wing reporters so they would frame the story as Whitaker being a fundamentalist whacko.

He is a mainstream Evangelical Lutheran with three children.

The enemy of the people media tried to smear him as Trump appointing the head of the Westboro Baptist Church to run the Justice Department.

The goal of these stories was to frighten Republican Senators.

Many Republican Senators are not strong social conservatives.

They run in elite circles where Christianity is frowned upon.

So the fake news thought if they could create Christian boogeyman Republican Senators they would abandon Whitaker and force Trump to replace him.

The Deep State wants Whitaker out because Whitaker knows the Mueller probe is a rigged witch hunt.

They want a “yes man” running the DOJ that will allow Mueller to complete the coup to overthrow the President and subvert American democracy.

Jeff Sessions Crossed This Unthinkable Line With The Deep State