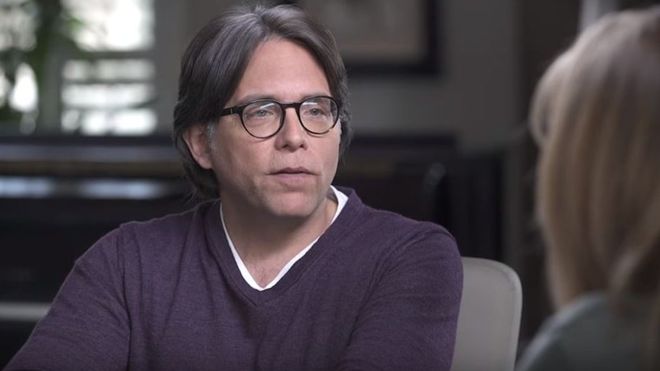 Trial of the cult’s leader reveals some shocking ties to the Democrat party elite.

And the cult’s crimes from sex trafficking to child pornography threaten to destroy the Democrat Party.

Because the despicable sex cult had close ties to Hillary Clinton and other top Democrats.

Keith Raniere, the founder and leader of the notorious NXIVM sex cult has been found guilty on all counts against him.

Included in his crimes was sex trafficking from Mexico and child pornography. The jury at Brooklyn Federal Court reached its verdict after only brief deliberations Wednesday.

Raniere violated young girls from Mexico he brought illegally into the U.S. and imprisoned them on threat of deportation by the cult. He was also convicted of charges stemming from human experiments and Satanism-inspired rituals that took place at the cult.

According to the mountains of evidence exposed by this historic trial there could be repercussions for a number of leading Democrats, including some 2020 presidential contenders.

“The defendant tapped into a never-ending flow of women and money,” the prosecution said of Raniere after his conviction, calling him a “crime boss with no limits and no checks on his power.”

In addition to the shocking evidence of sexual depravity, kidnapping, torture and worse, the records presented at trial also show NXIVM’s involvement with major players in the Democrat party.

Evidence presented shows how the NXIVM sex cult illegally raised money for Hillary Clinton’s presidential campaign, how it counted Clinton friend Richard Mays and Kirsten Gillibrand’s stepmother as active members of the cult and Gillibrand’s father as an employee.

And in breathtaking fashion it was proven that the cult’s “ally” Chuck Schumer was compromised because the cult possessed all of his financial records.

The NXIVM sex cult had deep opposition research files on its political enemies, including Roger Stone, according to documents from the trial.

Documents from the NXIVM archives are also shedding light on how the sex cult stored data on top politicians including Chuck Schumer — whom the cult viewed as a “friendly” ally, and Hillary Clinton.

The Albany Times-Union wrote: “A former close confidant of Keith Raniere, founder of the NXIVM corporation, claims top officials in the secretive organization used a Canadian investigative firm or other means to sift the financial records of six federal judges and U.S. Sen. Charles E. Schumer, D-N.Y., according to court records.

The six judges whose financial records Keeffe alleges were analyzed have all presided over cases involving NXIVM or its perceived adversaries and critics.”

Keeffe left NXIVM in February 2014 and turned over a treasure trove of documents about NXIVM and is in hiding, so the NXIVM cult had information on Schumer.

In addition to Schumer and Clinton, the sex cult had deep ties with Senator Kirsten Gillibrand.

The Democrat Senator and presidential candidate’s family ties to the NXIVM sex cult are raising serious questions about her relationship with the cult that she once denied knowing about.

Gillibrand’s father and stepmother, who are actually also second cousins, were both heavily involved in the cult in the period shortly before they got married, according to both eyewitness accounts, and court documents proving that Gillibrand’s father Doug Rutnik was employed by NXIVM.

Gillibrand’s father served as a broker between NXIVM cult leader Keith Raniere — whose initials were branded on his female sex slaves — and the then-New York attorney general to resolve Raniere’s financial problems with the state.

There is more to come on this shocking story, involving a large number of Democrat Party leaders and donors, Hollywood, and some storied American families.

We will keep you posted as more comes out.