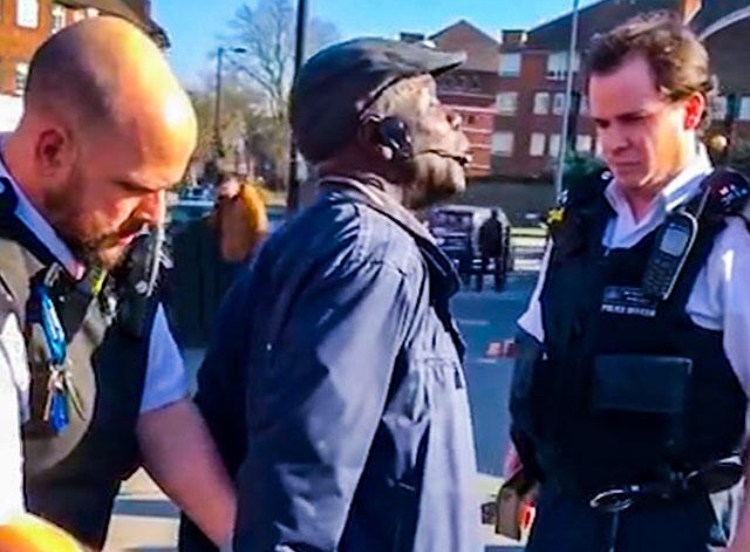 “I believe God loves everyone, including Muslims, but I have the right to say I that I don’t agree with Islam — we are living in a Christian country, after all.”

This is what street preacher, Oluwole Ilesanmi, said in a tweet on July 28th after a 5-month long battle with Scotland Yard following his wrongful arrest in February this year.

Apparently in the UK, stating in public that Jesus is the Way, the Truth, and the Light is considered “hate speech,” “Islamophobia,” and “breaching the peace.”

But little did they know that God would have the last word!

Ilesanmi, a Nigerian immigrant who has lived in Britain for 9 years, has spent those nine years spreading the message of Jesus.

He has a true passion for the Lord and has been using this passion to save souls for Christ.

However, in February of this year, he encountered opposition whilst preaching on the streets of North London, just outside the Southgate Underground Station.

He was subsequently arrested for “breaching the peace.”

What was the source of his crime you may ask?

Well, apparently Ilesanmi had announced that Islam was an “aberration” and that worshiping Allah was “idol worship.”

When a Muslim man heard this, he began to get aggressive with the preacher.

A bystander, afraid that the other man might hurt Ilesanmi, alerted the police to the situation.

So, what happened when the police got there?

Well, instead of arresting the aggressive man who looked like he might do some real violence, they arrested Ilesanmi for “breaching the peace,” saying he had committed a potential “hate crime” due to the speech he was using.

Now, it must be said that at first police asked Ilesanmi to leave the area and discontinue his preaching there. But perceiving that he had done nothing wrong, Ilesanmi refused to leave.

This was when the police not only accused him of being a “racist” but ripped his Bible right out of his hand – like it was a dangerous weapon they had to apprehend.

It is true that Hebrews 4:12 states, “For the word of God is living and active, sharper than any two-edged sword, piercing to the division of soul and of spirit, of joints and of marrow, and discerning the thoughts and intentions of the heart.”

In a video taken by a bystander, you can hear Ilesanmi begging the police, “Don’t take my Bible away.  All I wanted was for them to understand the Word of God.”

The police responded to his objections by telling him, “You should have thought about that before being racist!”

It was these two actions in particular that cut Oluwole to the core.

“I have never been racist and I never will be.  A racist is someone who doesn’t like other human beings and God has taught me love.  I can never be a racist.”

Oluwole also stated that the message he preaches is one of peace.  He is simply out there to help Jesus change people’s ways and save souls.

“What the Bible tells me is what I have to tell them.  The love of people is in my mind.  What happens to us after we die is what endears me to tell people the truth.”

So, what did the police do after they arrested Ilesanmi and put him in their car?

Well, he asked where they were going to take him and he was told, “Somewhere where you can’t get back to preach.”

It turned out that they dropped him off about 5 miles away with no money and no way to get back.  Eventually an elderly man paid for a bus ticket for him.

The police would later say that in dropping him off, Ilesanmi was “de-arrested.”

Oluwole Ilesanmi was emotionally hurt and humiliated.  He was surprised that this happened, especially in a country where he was supposed to have “free speech.”

“Everyone has the right… to manifest his religion or belief, in worship, teaching, practice and observance.”

In fact, due to a change to the Public Order Act in 2014 in the UK, Christians are allowed to preach unless the message they are giving uses “threatening or abusive words.”

Ilesanmi was just stating that he saw the worship of Allah as idol worship and called Islam an “aberration,” but he was not trying to abuse or threaten anyone, nor was he trying to incite anger or a riot.

He was simply stating his beliefs, just as he knew the law in the UK told him that he could. But he was told by police that he was “disturbing people’s days” and that “no one wants to listen to that.”

So, in effect, they got to choose what they thought people wanted to hear and told Ilesanmi to shut his mouth in a country that has laws that protect free speech.

This was an outrage for more than just Ilesanmi.  When Christian Concern, an organization that strives to bring Jesus and freedom back to the UK, heard about what happened to Oluwole, they went into action.

The founder and CEO of Christian Concern, Andrea Williams, said that, “Street preaching in the UK has a long, storied history.  Open air preaching is the only way to guarantee that all the public is given the opportunity to respond to the Love of Jesus Christ.”

Their sister organization, Christian Legal Centre, helped Ilesanmi challenge the Metropolitan Police for the way he was treated and for his arrest in general.

With their help, the veteran street preacher was offered 2,500 pounds in compensation for his “false arrest, imprisonment, and unlawful detention.”

To celebrate this momentous triumph, one that many thought would not happen, Ilesanmi and other street preachers delivered a petition to New Scotland Yard and the London Assembly, calling on the Home Secretary to investigate the training and guidance of police officers on how they handle street preachers.

For Oluwole Ilesanmi, and all other street preachers and lovers of the Word of God, this is a wonderful occasion that proves that if you fight for your freedoms, you can keep them – even if there are thousands of people who want to see them taken away.

It also proves something infinitely more important – that God is always on the side of His people and that He will fight for us and help us win the battles that matter most.

These battles are won in His name and for His good cause.

Let us never forget this fact: “For God hath not given us the spirit of fear; but of power, and of love, and of a sound mind.  Be not thou therefore ashamed of the testimony of our Lord, nor of me his prisoner: but be thou partaker of the afflictions of the gospel according to the power of God; Who hath saved us, and called us with a holy calling, not according to our works, but according to his own purpose and grace, which was given us in Christ Jesus before the world began.”

We have the power of love and strength of mind given to us by God to do battle against all the evils of this world.

Imagine what would happen if, like Ilesanmi, we could recognize that and step out in Faith to challenge the evil-doers of this world in the name of Love.

Please join us in praying for those who are fighting the good fight for our Lord Jesus Christ and let us realize that we can stand next to them and fight with them and not be ashamed.