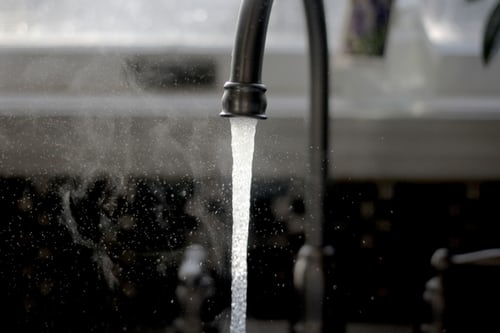 Wikipedia defines Godwin’s law as “an Internet adage asserting that ‘As an online discussion grows longer, the probability of a comparison involving Nazis or Hitler approaches.’”

Over the decades, plenty of people from both sides have pointed fingers at the U.S. government and compared the entrenched elite’s actions to Hitler.

And now that a new study proves Hitler put this in the water to “control the Jews,” one has to ask why Americans are drinking it too?

When Hitler took power in the 1930s, one of the first things his regime did was conduct a myriad of medical experiments on Jewish citizens as well as other political opponents.

The goals were always sinister.

In some cases, the medical experiments weren’t about anything, but designed simply to torture.

Hitler’s regime conducted other experiments to see how they could make “the enemy” more passive or more controllable.

The experiments they used for changing behavior were probably the most successful.

One of these experiments with the highest rate of success involved dumping fluoride in the water to change Jewish citizens’ brain matter.

In 1954, a chemist by the name of Charles E. Perkins published a report titled “The Truth about Water Fluoridation.”

In it, he documented how Hitler used fluoride to control Jews and others.

“In the 1930s, Hitler and the German Nazis envisioned a world to be dominated and controlled by a Nazi philosophy of pan-Germanism.

Repeated doses of infinitesimal amounts of fluoride will in time reduce an individual’s power to resist domination, by slowly poisoning and narcotizing a certain area of the brain, thus making him submissive to the will of those who wish to govern him.”

For years, Perkins work was dismissed as a conspiracy.

And yet, recent tests on fluoride reveal it can have an adverse effect on IQ, personality, immune function, and more.

In their report, they documented that pregnant women who drank fluoridated water had children whose IQ levels were lower than those of women who did not.

The conclusion of their research is as follows.

“In this prospective birth cohort study from 6 cities in Canada, higher levels of fluoride exposure during pregnancy were associated with lower IQ scores in children measured at age 3 to 4 years. These findings were observed at fluoride levels typically found in white North American women. This indicates the possible need to reduce fluoride intake during pregnancy.”

This study is just another in a litany of others supporting claims that fluoride is dangerous to human health.

And yet it’s still in our water supply.

It’s anyone’s guess why the U.S. government at the state and local levels insist on dumping fluoride in the water. You could certainly make the case they do it to keep the population dumb and assert mind control on the populace.

After all, it’s why Hitler is believed to have used fluoride on the Jews.

But the question isn’t why America adds fluoride to our water.

The question here is, if you’re drinking fluoridated water, what will you do to stop drinking it today?

This County Stole $300,000 From Its Citizens And You Won’t Believe What They Bought With The Money