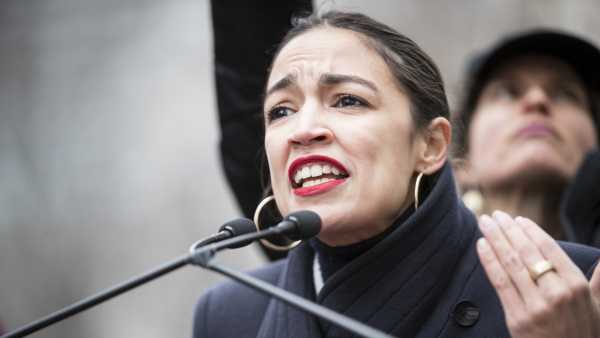 While most Republicans and true conservatives have derided the efforts to impeach the President, Democrats have mostly stayed in line.
Of course, the Never-Trump Republican grifters are aiding the enemy as well.
But now, Democrat rock star Alexandria Ocasio-Cortez has finally admitted what the Democrats’ efforts to impeach Donald Trump are really all about.
Most astute political observers reported that the first few days of impeachment hearings did not go well for the Democrats.
Incoherent witnesses, lack of evidence, lies, deceit, and a clear Deep State plan to try and remove the President have all come to light.
In fact, the Democrats handling of impeachment proceedings have even the somewhat sane Never-Trumpers admitting it’s a sham and a waste of taxpayer dollars.
Meanwhile, poll after poll is showing that the vast majority of Americans are either anti-impeachment or just don’t care.
This is likely the reason why Democrats are running their own polls and trying to get a gauge on how best to impeach the President.
And while it’s truly amazing that anyone could defend “impeachment via a public opinion poll,” it may be the only thing the Democrats and Deep State operatives have left now that their so-called “evidence” was laughed out of the hearings.
So it’s not surprising that Democrat leaders, presidential candidates, and Never-Trump pundits are trying to explain the different reasons why impeachment is necessary.
But Congresswoman Alexandria Ocasio-Cortez’s explanation may have just given Republicans and anti-government corruption advocates the ammunition they need to fully discredit the impeachment circus.
During an interview on CNN, Ocasio-Cortez stated that the goal of impeachment has been to prevent “a potentially disastrous outcome” from happening in next year’s presidential election.
Yep. Democrats are moving forward with impeachment of President Trump because they’re afraid it’s the only way to stop him from winning again in 2020.
AOC said:
“We all need to move quite quickly because we’re talking about the potential compromise of the 2020 election. And so this is not just about something that has occurred, this is about preventing a potentially disastrous outcome from occurring next year.”

Republicans have previously referenced comments made by other House Democrats that proved impeaching Trump was purely political, like when Texas Democrat Congressman Al Green told NBC, “if we don’t impeach this president, he will get re-elected.”

Today’s House Intelligence Committee hearing is off to a great start with Republicans leaving a few signs, among them of a quote from Houston Rep. Al Green, who pushed for impeachment before the formal inquiry. pic.twitter.com/HG2PR1gI8u

But AOC’s comments were so bluntly political that many observers on the fence are now forced to see the entire impeachment process for what it is – a complete sham and a scourge on our Republic.
Of course, if it were only a sham and a waste of time, that would be bad enough.
But this process has only emboldened the Deep State operatives hidden in the recesses of aged government buildings to destroy our Republic.
And it’s cost taxpayers tens of millions of dollars – with more to come.
It’s ripping apart the very fabric of our society, and we will only see more violence, more riots, and more hatred as the efforts to impeach Trump continues.

Conservative Students Being Targeted and Silenced on Campuses Across the Country