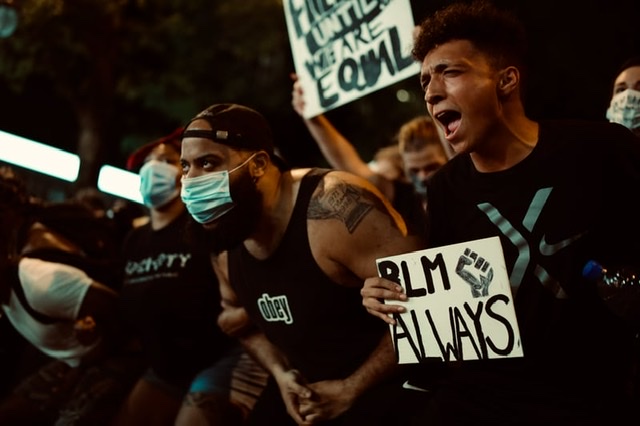 The killing of George Floyd by Minneapolis police officers was a horrible abuse of power and should never happen again.

Although he didn’t deserve to die the way he did, George Floyd was no saint or hero. That is part of the Antifa/BLM lie that is infecting the nation.

And the lies, crimes and destruction brought about by Black Lives Matter threaten all of us.
Let’s be clear right up front. Abuses by overzealous, out-of-control police are not acceptable, anywhere.

And they are heinous and foul crimes when they involve police brutality that ends in death or harm to an individual.
It doesn’t matter on the guilt or innocence of the person, it’s wrong.

And, to be clear. Yes, black lives do matter. ALL black lives. Just as all lives matter. The killing of any human being by the police is only warranted when defending life.

There. We here at Deep State Journal hope we have made our view clear.

We despise overreaching police authority, we strongly believe in criminal justice reform, reining in state powers over the individual, and especially abhor the use of police force to kill any human being.

But we also strongly oppose the riots, violence, destruction, rape and even murder all being committed in the name of Black Lives Matter and their Antifa stormtroopers.
That is just as wrong. And such lawlessness and crime must be met with swift and just force.

If not, you end up with situations like the recent shootout in Austin that left one rioter dead, after politicians let the situation get out of control.

And almost all this violence can be blamed on two things.

First, the complete incompetence of local liberal Democrat politicians, and in many cases the actual collusion of these politicians with the rioters.

Second, it can be laid at the feet of the Black Lives Matter movement itself.

Because despite the screams and rants of systemic racism against blacks by whites, the actual facts, figures and data prove otherwise.

In fact, despite what the billionaire socialists spew out, and what the limousine liberal Hollywood mansion dwellers and spoiled, pampered professional athletes tell you, it turns out blacks actually value black lives far less than do whites.

Furthermore, it turns out there’s a ton of evidence to back up that assertion. So much evidence that it isn’t just an assertion, it’s a fact.

For example, according to FBI data, in 2016 in cases involving multiple offenders and/or victims, 7,881 blacks were murdered and 6,095 of their murderers were black.

The rate of black-on-black murder in that sample was a whopping 77 percent.

By comparison, 6,576 whites were murdered and 5,004 of their murderers were white. Meaning the rate of white-on-white murder in that sample was a similarly high 76 percent.

The same FBI data, when looking at cases involving a single victim/single offender murder showed 2,870 blacks were murdered and of those, 2,570 of the murderers were black.

That means 89% of blacks murdered by a single individual were killed by other blacks.
In cases of single victim/single offender murder, 3,499 whites were murdered and of those, 2,854 of the murderers were white while 533 were black.

So 82% of whites murdered in single victim/single offender cases were killed by other whites.

What does that tell you? Basically, that murders tend to be overwhelmingly committed by members of the victim’s own race.

That means the old white supremacist racist arguments of marauding bands of blacks killing whites is complete and utter nonsense. But then, so is the BLM claim of mass murders of blacks by whites.

The same numbers hold true for all crimes.
For example, according to detailed data from the U.S. Department of Justice, in 2018 there were 563,940 incidents of violence against blacks.

There were nearly 3.6 million of the same types of incidents of violence against whites; only 15% of those perpetrators (approximately 540,000) were black.

This means that, excluding murder, the ratio of black-on-white violent crime is nine times higher than white-on-black crime.
It turns out blacks and whites are mostly killing, raping, assaulting and robbing Americans of their own race.

This is not systemic racism; this is data and truth. Two things the radical left knows nothing about.

Does racism exist? Yes, absolutely, it has from man’s fall. But our nation has made great strides and continues to move towards a land where all are treated equally with love and compassion.

What does not exist is systemic racism. Maybe it once did, but that was a long time ago.