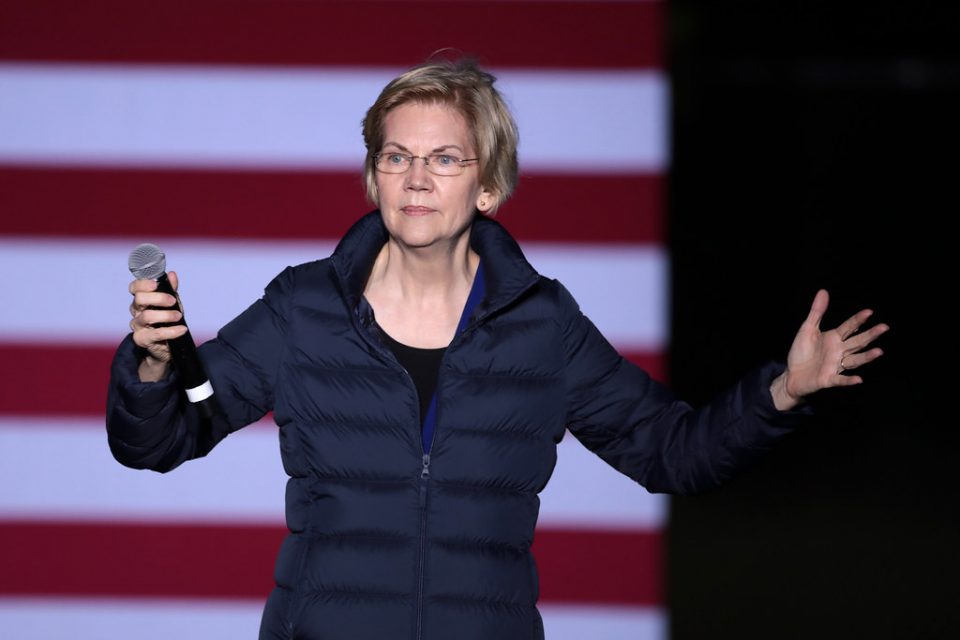 She spent years lying about her ethnicity, her mom, her children, and even her childhood.

But now she’s decided there isn’t much left in her life to lie about.

So, Elizabeth Warren has decided to do the Tomahawk Chop on her Democrat rivals and all men across the country instead.

As her fellow Democrat rivals drop like flies, Senator Elizabeth Warren (D-MA) has been feeling the heat lately herself, as it is appearing more and more that Creepy Uncle Joe Biden (D-DE)has the nomination sewn up.

And those in strong opposition to Biden seem to be coalescing around Socialist Bernie Sanders (I-VT)instead of Warren.

So, like any good Democrat politician, Warren just had to find a “boogeyman” to blame all her troubles on.

In Warren’s case that appears to be anyone, well anyone who identifies as a male (we are unsure about those who identify as an X or Z or some other letter).

In a very strident sexist statement, Senator Warren called out the men in the Democrat debate in Iowa last week, all but calling them political losers;

“Can a woman beat Donald Trump? Look at the men on this stage. Collectively, they have lost ten elections. The only people on this stage who have won every single election that they’ve been in are the women. Amy and me.”

Not lost on honest observers was the fact that if a man had uttered the same comment about Warren, she would have screamed like a banshee in protest of such a “sexist” remark.

And the #meToo warriors would have been out in force to spring to her defense.

Because the fact is, Warren knows her effeminate Democrat base lets her get away with such rhetoric because they simply hate men and what they refer to as “toxic masculinity.”

What that exactly means seems to depend on who you talk to, but suffice it to say, if you are a conservative in America today, you suffer from it.

But Warren went further than that when she specifically called out the “Great Grandfather of the Socialist Movement” and owner of at least three mansions, Bernie Sanders.

In fact, her line at the debate was based on her attacks on Sanders, who she now sees as her greatest rival for the nomination.

In a widely reported story, Warren claims Sanders told her in a private meeting that a woman couldn’t win the nomination.

This story first broke on CNN (interestingly enough the sponsor of the Iowa debate).

According to CNN, and now Warren, in December of 2018 Sanders told Warren, who many consider to be his main rival for the hard-left Democrat primary vote, that a woman could not win the 2020 race for the White House.

Sanders responded to this charge in a statement to Fox News, in which he said;

“It is ludicrous to believe that at the same meeting where Elizabeth Warren told me she was going to run for president, I would tell her that a woman couldn’t win. It’s sad that, three weeks before the Iowa caucus and a year after that private conversation, staff who weren’t in the room are lying about what happened.”

CNN, for its part, seemed to defend Warren and call Sanders a liar during the debate adding fuel to the fire.

As the Iowa caucuses get closer there is sure to be more of this nastiness and name-calling by the “inclusive” Democrats. We will bring it all to you.